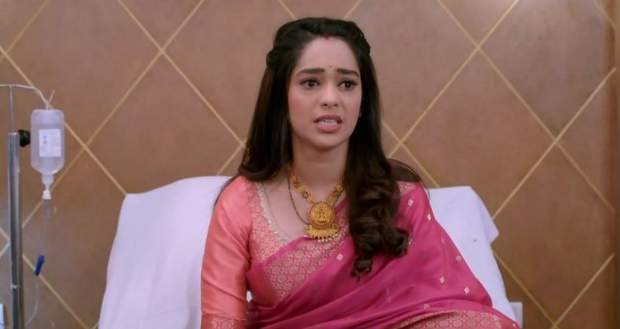 Prachi refuses to listen to Ranbir’s words and states that she has to leave the house for her own good.

As Prachi continues to pack her things, Ranbir says that he will die if Prachi leaves him.

Prachi slaps Ranbir and warns him to never say those words again in front of her as she cannot bear to imagine it becoming true.

Ranbir tells Prachi that she will take his life with her after she leaves and begs her to show some kindness to him.

Continuing to persuade Prachi, Ranbir asks Prachi to give him a reason to be alive and proceeds to hug her.

Prachi barely controls her emotions and says that every promise that Ranbir makes always gets broken by himself.

Expressing her anger at Ranbir, Prachi tells him that she has lost the strength to trust him anymore and does not have a bit of patience left.

Prachi reminds Ranbir that he had left her and decided to marry Rhea while she was gone.

Seeing that Prachi is not ready to stay back, Ranbir offers a helping hand and lifts up the luggage only to make all clothes drop on the floor.

As Prachi and Ranbir start to arrange the clothes, Ranbir notices two photographs of him in Prachi’s bag which she says she has put in by mistake.

Ranbir holds Prachi’s face in his palms and tells Prachi that she also does not want to leave him by her heart.

Hearing those words from Ranbir, Prachi loses her control and breaks down into tears while hugging Ranbir tightly.

Meanwhile, the family members reach the house and Alia decides to manipulate Pallavi so that she throws Prachi out if she is still present inside.

Alia tells Pallavi that Prachi is a liar and manipulative in nature and needs to be thrown out of Ranbir’s life.

Adding salt to the wound, Rhea tells Pallavi to prove her love for her by throwing Prachi out by herself.

In the meantime, Prachi withdraws from the hug and says that she has to leave for the sake of her own life.

As Ranbir asks Prachi to stay back for their child’s sake, Prachi gets furious and tells Ranbir that she wanted to make Ranbir suffer by not telling him about her pregnancy.

Prachi walks out with her luggage with Ranbir following her when she bumps into Dida and Vikram.

© Copyright tellybest.com, 2020, 2021. All Rights Reserved. Unauthorized use and/or duplication of any material from tellybest.com without written permission is strictly prohibited.
Cached Saved on: Saturday 1st of October 2022 12:22:54 AM