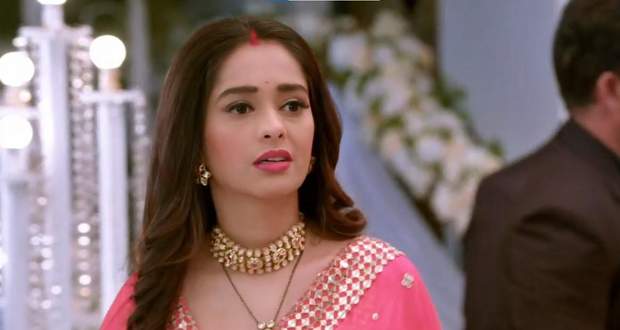 Today's Kumkum Bhagya 20th June 2022 episode starts with Ranbir comes calling for Prachi when he gets a message from Stanley about Prachi's location.

On the other hand, Shahana offers tea to Prachi while Prachi talks about her first meeting with Ranbir.

Later, she expresses her regrets for not achieving the love that she always required from Ranbir.

Just then Ranbir arrives at Shahana’s house and requests Prachi to come home for a short while.

Prachi is angry at Ranbir and does not want to go with him but gives in to Ranbir’s insistence.

Meanwhile, a waitress brings cake to the party which makes Rhea and Aliya happy.

Just then Ranbir comes in with Prachi, Stanley and Shahana.

Seeing the midnight arrive Ranbir begins to confess his feelings for Prachi.

Rhea who was under the impression that Ranbir is going to propose to her realises Ranbir’s intentions and leaves for her room in disappointment but faints just as the clock strikes twelve, spoiling Ranbir’s confession.

Everyone takes Rhea to the hospital and worries about her health.

Just then, Dida sees Stanley at the hospital with Ranbir and misunderstands them.

Later, Ranbir asks Stanley to not say anything about tonight's planning.

After a while, Prachi tells Shahana that she felt Ranbir’s confession and she is quite certain he wants to talk about beginning a new life with her and her child.

At the same time, she does not want to develop hopes for fear that it might be her wishful thinking.

In the meantime, Ranbir comes to Prachi and once again tries to confess his feelings but Aliya interrupts him and takes him away.

Pallavi scolds Ranbir for being chummy with Prachi while Rhea is in an emergency.

Ranbir also gets angry for being called to tasks and defends himself and Prachi.

Just then the doctor comes in and informs everyone that Rhea is fine and pregnant.

Ranbir is shocked at the news while Pallavi and Aliya get extremely happy.

Prachi leaves the hospital on hearing about Rhea’s news.

Pallavi sends Ranbir to meet Rhea while Ranbir is wondering about the night when Rhea might have gotten pregnant.

© Copyright tellybest.com, 2022, 2023. All Rights Reserved. Unauthorized use and/or duplication of any material from tellybest.com without written permission is strictly prohibited.
Cached Saved on: Monday 21st of November 2022 06:21:14 PMCached Disp on: Friday 9th of December 2022 05:47:04 PM