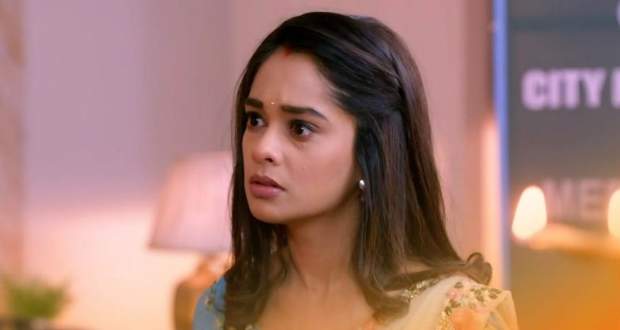 Today's Kumkum Bhagya 20th May 2022 episode starts with Alia informing Rhea that Ranbir was stabbed by their goons while he was protecting Prachi’s mangal sutra.

Rhea gets shocked at hearing that but Alia tells her that they will use Ranbir’s condition against Prachi and explains to Rhea what she has to do.

Starting with her acting, Rhea declares that it is because of Prachi that Ranbir got stabbed by the goons.

As Pallavi hears the whole story of what happened at the temple, she boils with rage and stomps her way out to find Prachi.

Meanwhile, Prachi bawls her eyes out on Sahana’s shoulder on hearing the news about Ranbir’s condition.

Pallavi comes to Prachi while she is watching Ranbir through the door and lashes out at her.

With eyes firing with anger, Pallavi accuses Prachi of trying to kill Ranbir and tells everyone that bringing Ranbir to the hospital is just a show-off.

Rhea also joins in verbally abusing Prachi but Prachi does not remain silent on hearing those harsh comments.

Prachi tries to explain the incident herself but Rhea interrupts her when she says that someone might have called the goons to return.

Everyone gets distracted from the discussion as Pallavi staggers in her steps due to high blood pressure.

After Pallavi successfully shoos Prachi away from the room where she was being treated, Alia tells Pallavi to find a permanent solution for Prachi.

Meanwhile, Prachi gets into Ranbir’s room and sits by his side confessing her feelings for him.

Attempting to revive Ranbir, Prachi puts his hands on her stomach and tells him that they are pregnant together.

Just then, Ranbir’s vitals get unstable and the doctor asks Prachi to go outside.

Prachi bumps into her gynaecologist as she was about to fall and gets scolded by her for being careless.

On seeing Pallavi coming, Prachi asks the doctor to keep her pregnancy a secret.

However, Dr. Madhu tells Prachi that she will tell Pallavi everything if she does not go home and give her body rest.