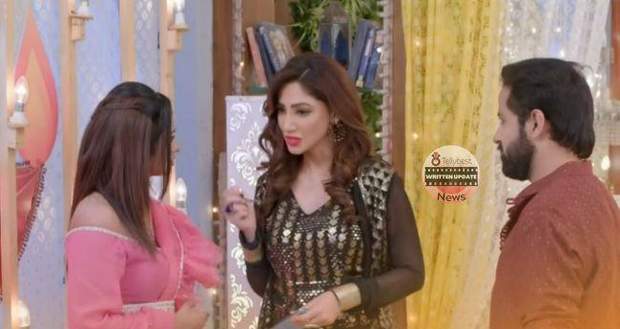 However, Aliya stops her in time and drags her inside while Pallavi watches her go and wonders why Rhea is wearing Prachi’s dupatta and Prachi Rhea’s.

In the meantime, Ranbir comes to Neha and asks her to help make Prachi jealous who is watching them from afar.

Later, Prachi comes to Ranbir and asks him what was she talking to Neha.

Ranbir enjoys Prachi’s possessiveness and tells her that Neha was telling him that she likes him and thinks him to be hot.

Prachi gets angry to hear that and goes in search of Neha to put her to right.

Meanwhile, Aliya scolds Rhea for putting Prachi’s dupatta on fire. She also tells Rhea to maintain her distance from her if she does not want the blame for Prachi’s death to come on her.

Rhea argues with Aliya to let her make the job easy but Aliya sternly stops her from being stupid.

In the meantime, Aliya’s henchman comes to inform her that he has failed the brakes of the car which Sid will drive to his death.

Later, Aryan comes to Shahana and argues with her and later gets angry to see her calling Sid.

Later, they banter with each other and bets about being a better driver.

Just then Shahana sees Sid come to her and tells her that she is busy and goes to Sid who is coming with the henchman.

Aryan get distracted by kids while Henchman makes an excuse and tells Sid that his wife is not well and he has to leave immediately.

Meanwhile, Shahana tells Sid that she will drive the car to prove Aryan wrong.

Just then Aryan returns and takes away the key with Shahana telling her that he will drive the car.

Elsewhere, Prachi acts jealous of Neha and tells her to stay away from Ranbir who is her husband.

Just then, Ranbir comes behind Prachi and teases her telling her to not get so much jealous or else all her emotions will come out.

Meanwhile, Pallavi comes to Aliya and tells her that Aryan has taken the car to park somewhere else and Rhea is wearing the dupatta that she has got prepared for Prachi.

Aliya is stunned to hear this news and rushes outside fearing for both Aryan and Rhea.

Meanwhile, Aryan and Shahana are bantering with each other when Aryan realises that the car breaks are not working.

Aliya is feeling scared and tells her Henchman to find Rhea and keep her away from the fire.

Later, Aliya spots Rhea and follows her but she disappears from there again.

Aliya prays for Aryan and Rhea's safety while Aryan is trying hard to control the car.

© Copyright tellybest.com, 2022, 2023. All Rights Reserved. Unauthorized use and/or duplication of any material from tellybest.com without written permission is strictly prohibited.
Cached Saved on: Monday 21st of November 2022 04:08:54 AMCached Disp on: Friday 9th of December 2022 05:40:07 AM