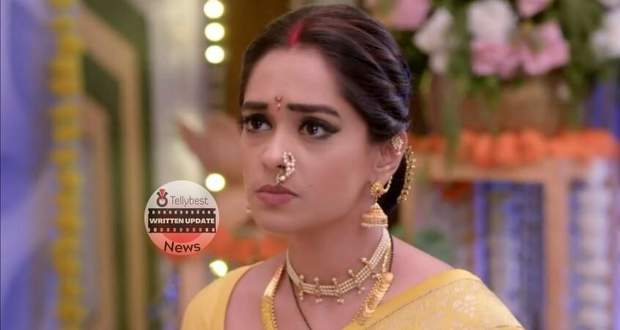 Today's Kumkum Bhagya 20th September 2022 episode starts with Rahul telling everyone how Rhea bribed him so she can play the role of an ideal daughter-in-law.

Hearing this, one of his friends urges Rahul to continue revealing aunt-niece secrets while he collects jewelry from everyone.

The friend turns to Alia and threatens her that he will kill Rhea if she does not give him her necklace.

This frightens Alia and she quickly gives her necklace.

In the meantime, the goon’s eyes fall on Prachi’s ring and he orders Prachi to give it to her but Prachi denies it by announcing that it is her mom’s wedding ring.

Hearing this, the goon starts forcing Prachi while Ranbir punches the guy.

After this, a huge fight breaks out in the room, and Ranbir starts punching the guy senselessly.

Meanwhile, a girl fires a gun in the air to stop the fight.

Seeing this, everyone runs away in different directions and a goon finds out his bag.

While Rhea and Sid are arguing, Rahul’s girlfriend and the goon start eavesdropping.

At the same time, Prachi and Ranbir arrive there and Sid starts telling them to stay away from Rhea as she only wants to cause harm to Prachi.

However, Alia also arrives there and reminds Sid that Mihika is gone from the Kohli mansion.

Alia’s threat works and Sid quickly changes his topic by announcing that he was just angry with Rhea.

At the same time, Rahul’s girlfriend Priya approaches them with a gun and orders them to go to the hall with her.

However, she lets Prachi and Ranbir stay behind due to Prachi’s coughing.

On the other hand, Mihika recalls that her phone is in Kohli’s mansion and begs the goons to let her call so she can warn anyone about the goon’s motive.

While Prachi is waiting in the hallway for Ranbir, she gets a call from Mihika who tells her that a guy has mixed two powders that can put anyone to sleep if someone inhales it.

After the call cuts, Prachi starts running toward the hall but Ranbir stops her by urging her to think about it.

Prachi quickly convinces Ranbir to help her and Ranbir agrees.

Later in the hall, while Prachi informs everyone about the poisonous powder, the goon creates the smoke.

Seeing this, Prachi orders everyone to open the window but everyone starts inhaling the smoke and starts falling to the ground.

Later in the library, Prachi, Ranbir, and Rhea fall unconscious.

After a while, Ranbir regains his consciousness and tries to wake Prachi up.

© Copyright tellybest.com, 2020, 2021. All Rights Reserved. Unauthorized use and/or duplication of any material from tellybest.com without written permission is strictly prohibited.
Cached Saved on: Friday 30th of September 2022 08:45:55 PMCached Disp on: Saturday 1st of October 2022 05:46:44 PM