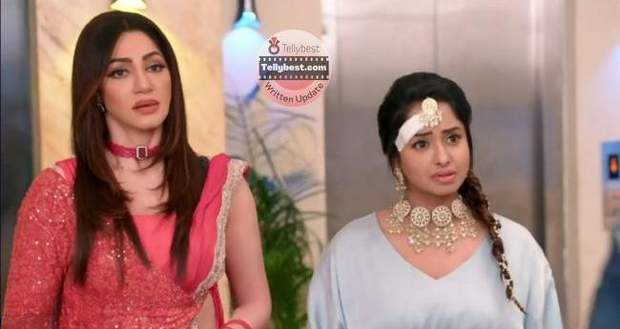 Today's Kumkum Bhagya 21st December 2022 episode starts with Prachi asking Ranbir what he would do if she is not around him anymore but stops midway as she realizes that she is getting married to Sid.

Prachi says that she needs to fix her makeup and walks away from Ranbir and the family members.

Running to the balcony, Prachi falls to her knees and remembers the loving moments she and Ranbir spent together in that same place.

Sahana comes and spots Prachi crying alone but decides not to do anything as she knows that nothing can console Prachi’s hurting soul anymore.

However, Prachi spots Sahana and asks her why god let her and Ranbir meet if they were not meant to be together.

Prachi says that God does not give her anything good for long as everyone she loves eventually leaves her.

Sahana tells Prachi that she should tell the family members about Rhea’s truth but Prachi says that she does not want to risk Mihika’s life.

Dida hears Prachi and Sahana talking about Rhea’s secret and asks them what secret they are hiding from all the family members.

Sahana smartly diverts the subject and tells Dida that they are talking about Rhea’s honeymoon surprise.

Meanwhile, Sid comes to Ranbir and tries to gaslight him by saying that he should be present at Prachi and his wedding.

Sid tells Ranbir that he can say later that he could not take Rhea to the hospital for the test as he was busy attending to the marriage as Rhea does not listen to him.

Ranbir gets triggered and asks Rhea to come with him to the hospital as they need to do the test.

Rhea asks Ranbir if he is doing these things on Prachi’s command which angers him more and he takes Rhea by her hand.

Ranbir leaves with Rhea after informing the family members that they are going to do the pregnancy test.

The marriage starts and the priest instructs the family members to cover both the bride and groom’s faces as the timings have changed a bit.

Aryan goes inside to clean his kurta while Millie comes after him and says that she is answering to Aryan’s proposal with a yes.

Aryan tries to explain to Millie that he was drunk at that time and did not mean anything but Millie does not listen to him and leaves.

Sahana comes into the room and hears Millie talking about the proposal which makes her go silent.

Meanwhile, Rhea goes into the doctor’s chamber while Ranbir waits for her outside.

The doctor tells Rhea that he knows that she is not pregnant and decides to tell the family about her lie.

Rhea tries to convince the doctor by asking him what amount he wants to receive for keeping his mouth shut but the doctor asks her to get out.

Back at the wedding, Dida suddenly crouches down while having chest pain which halts the wedding once again.

Sid and Vikram take Dida inside where Dida reveals that she is acting after Vikram leaves to call the doctor.

Sid tells Dida that he also does not want to marry Prachi which Alia hears while eavesdropping from outside the room.

© Copyright tellybest.com, 2022, 2023. All Rights Reserved. Unauthorized use and/or duplication of any material from tellybest.com without written permission is strictly prohibited.
Cached Saved on: Wednesday 25th of January 2023 02:55:15 PMCached Disp on: Monday 6th of February 2023 06:11:10 AM