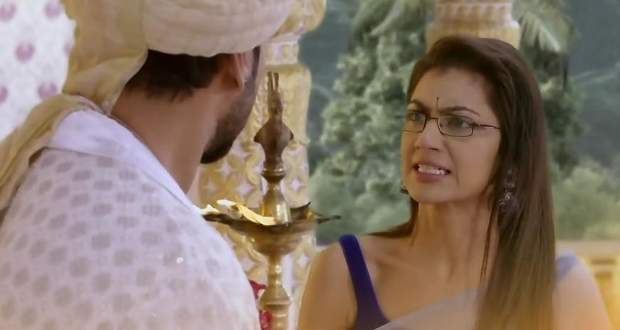 Today's Kumkum Bhagya 21 January 2021 episode starts with Sahana giving Prachi the lehenga and telling her that Palak wants her to wear it and do her Gathbandhan.

However, Prachi denies and takes Sahana with her to say no to Palak.

Elsewhere, Digvijay calls someone and tells him to meet him.

Pragya is sitting in a taxi and tells the driver to drive fast but he tells her that he will get fined is he goes past the speed limit.

She drives off in speed while the driver panics.

A biker meets Digvijay who gives him a gun case and shows a picture of Abhi. He further gives the biker money and Abhi's address.

Elsewhere, Palak tells Prachi that it was all Aaryan, Ranbir and Jai's plan while Sahana is also helping them.

Pragya collides with the shooter and gets out of the car.

She tries to help him with the box and sees the gun while he tells her to not touch it and goes from there.

She tells her that she is forced to help them while Ranbir comes there and manages to stop her from revealing the truth to Prachi.

Elsewhere, Pallavi badmouths Pragya while Vikram stands up for her.

Aaliya comes there and asks them if they know where Abhi and Meera have gone.

Elsewhere, the shooter sets up his rifle on the top of the cliff and targets Abhi from there.

Meanwhile, Pragya reaches the temple and stop Abhi and Meera from exchanging garlands.

She stops the holy fire by putting water in it.

Elsewhere, Aaliya thinks that the wedding has started as Meera isn't picking up her calls.

Pragya reveals to Abhi that Aaliya had kidnapped Prachi and got her sign on the papers by saying that they were property papers.

She says that she has not returned for his money and he asks her for what reason has she come.

He is about to do the Phera's while Pragya says that she loves him and has been loving him like she always used to.