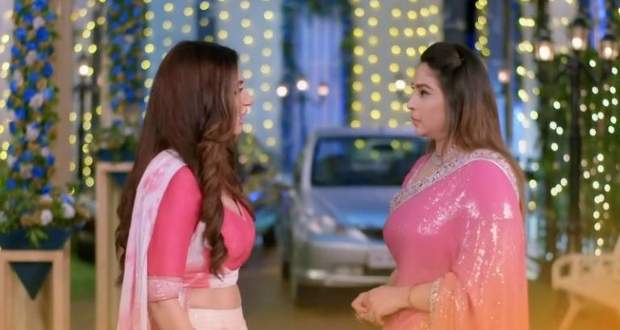 Today's Kumkum Bhagya 21st July 2022 episode starts with Prachi bumping into Pallavi while leaving the house but continuing on her way as she knows that Pallavi wants her out of the house.

However, Pallavi holds onto Prachi’s suitcase and announces that the suitcase will not leave the house.

Prachi tells Pallavi that it belongs to her and she has not taken anything except her clothes in that with Sahana supporting her.

Still, Pallavi remains stern in her decision and announces that neither the suitcase nor the owner of it will leave the house.

Hearing Pallavi’s words, everyone gets confused including Prachi herself.

Pallavi tells Prachi that she is her daughter-in-law and will not leave the house like that.

Alia instantly fumes up and questions Pallavi’s judgment as Rhea is the daughter-in-law of the Kohlis but Pallavi asks her to shut up.

Holding onto Prachi’s arm, Pallavi brings her to the center of the living room and says sorry while joining her hands.

Rhea and Alia go into shock on seeing the scene going on in front of them while everyone else feels happy on seeing Pallavi realize her mistake.

Pallavi apologizes for her harsh behavior in the past and says that she couldn’t even become a mother-in-law to Prachi.

For the sake of her motherhood and humanity, Pallavi asks for a chance from Prachi to let her make things right.

Prachi stops Pallavi from joining her hands and tells her that she understands Pallavi’s heart as a mother.

After Prachi comes back to her room, she breaks down into happy tears while Sahana comforts her.

Rhea tells Alia that she cannot live in a house where Prachi gets more respect and importance than her and begins to pack her bags.

Alia tries to stop Rhea but Rhea says that she will be faking an act of leaving the house so that everyone stops her.

In that way, Prachi will get to see what importance she holds in the family.

Elsewhere, Pallavi gives water to Prachi and thanks her for helping her to reduce her guilt a bit.

© Copyright tellybest.com, 2020, 2021. All Rights Reserved. Unauthorized use and/or duplication of any material from tellybest.com without written permission is strictly prohibited.
Cached Saved on: Saturday 1st of October 2022 09:02:55 PMCached Disp on: Thursday 6th of October 2022 04:26:49 PM