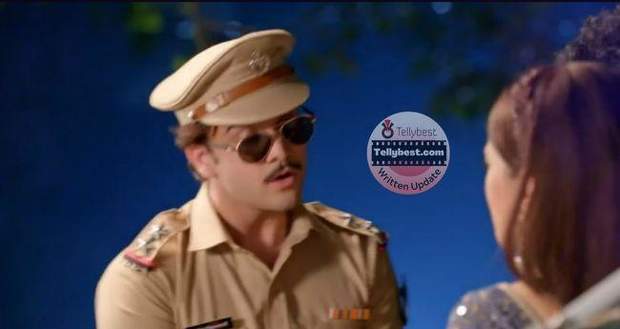 Today's Kumkum Bhagya 21st November 2022 episode starts with Aryan informing Ranbir that the gun has no bullets in it while he continues to boast in front of the goons.

Prachi pushes away the goons who were holding her and attacks him with boxes with Ranbir, Aryan, and Sahana joining her.

Trying to get out of there, Prachi tries to open the door while Ranbir and Aryan continue to throw things at the goons and distract them.

At last, the door opens and all of them get out of there and lock the goons inside the warehouse.

Just then, the police also arrive, which makes the goons nervous, and they run away to hide.

Meanwhile, Pallavi desperately searches for Prachi in the house and notices that Ranbir, Aryan, and Sahana are also nowhere to be seen.

Dida brings a tall woman with her whose face remains covered under a veil.

Pallavi, Alia, and Vikram get shocked to see such a buff woman and ask Dida who the lady is.

Dida tells them that it is Prachi when in reality, it is Sid who is hiding under the veil.

Pallavi and others find it difficult to believe that it is Prachi and try to take off the veil but Dida stops them saying that Panditji has asked to cover Prachi’s face for the next half hour.

Dida asks Pallavi to cool down as she hid about Prachi not being at home because of her temper.

Siddharth appears from under the veil and asks Vikram and Pallavi where he should hide as the original Prachi is there.

Siddharth hides under the table while Pallavi attacks Prachi instantly for going missing from the middle of her sangeet.

Ranbir asks Pallavi to stop for a moment and let Prachi say why she left the house in the first place.

Ranbir explains the whole incident to Pallavi, Alia, Dida, and Vikram about how Prachi saved Rhea and Mihika from some human traffickers.

Rhea explains how she got caught by some goons as she went to the hotel to fetch Mihika and how they got saved by Ranbir.

Ranbir denies taking the credit and says that it was Prachi who did everything.

Meanwhile, Mihika notices a waiter pointing a gun at her and understands that she is still not safe in that house.

Prachi and Sahana thank Siddharth for managing the situation in the house while Siddharth expresses his gratitude toward Prachi for saving Mihika.

Sahana explains the truth to Siddharth about how Rhea and Alia’s men betrayed them and decided to sell Mihika to get money.

Mihika comes there and says that she is still on their radar and can get killed anytime.

Siddharth tries to comfort Mihika while Prachi and Sahana assure them that they will protect Mihika together.

Prachi tells Siddharth that they can save Mihika once they prove that Rhea is not pregnant through the reports.

© Copyright tellybest.com, 2022, 2023. All Rights Reserved. Unauthorized use and/or duplication of any material from tellybest.com without written permission is strictly prohibited.
Cached Saved on: Monday 21st of November 2022 12:43:50 AMCached Disp on: Thursday 1st of December 2022 11:15:02 AM