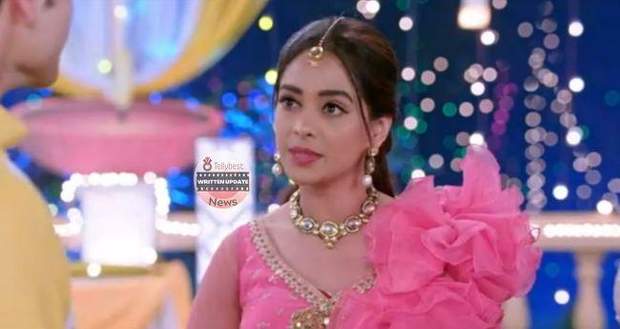 Today's Kumkum Bhagya 21st October 2022 episode starts with Ranbir teasing Prachi about being jealous while Prachi gets agitated and looks at him angrily and banters with each other.

After a while, Ranbir reminds her of their first Diwali and when he imagined the couple to be them.

Prachi tells him not to sweet-talk her because that will make her angry.

Ranbir tricks Prachi into touching her cheek and getting closer to her.

Just then Prachi observes Rhea’s dupatta near a Diya and rushes to her to save her.

However, Rhea once again tries to put her dupatta to the fire. However, Aliya just comes there and stops Rhea and takes her away.

Meanwhile, Aryan and Shahana fight about stopping the car.

Later he finds a tree and crashes his car into it after telling everyone to brace for the impact.

Later, Aryan feels scared of his mother’s anger after crashing her car.

Shahana and Sid suggest him to call his mother and confess to her.

In her room, Rhea gets hyper-angry at Aliya for taking away her opportunity of killing Prachi and talks incessantly about making her wait while Ranbir romances Prachi.

Hearing Rhea go on and on, Aliya slaps Rhea and tells her that her dupatta is the one that will catch fire because she is the one wearing the dupatta laced with dynamite.

Just then, Aliya gets a call from Aryan who tells her that he has crashed the car but he is safe along with Sid and Shahana.

Aryan is shocked to hear Aliya’s tepid response to something so big and tells Sahana that today she is the best mother in the world.

Meanwhile, Rhea shows a tantrum to Aliya for caring more about the car accident than her who just got saved from being blasted.

Afterwards, Aliya tells Rhea that they will have to make another plan to exchange the dupatta with Prachi.

In the meantime, Ranbir berates Prachi for risking her child by running in her condition.

He also tells her that if something happens to her it affects him more than her.

Prachi melts at Ranbir’s confession and tells him that she knows that no one cares for her more than her, no one loves her the way he does and hugs him.

Just then Pallavi sees them together and looks shocked but is distracted by some guests.

Later, Rhea and Aliya come out with the purpose to exchange the dupatta.

Seeing Rhea hold the Dupatta away, Aliya scolds her to wear it or else it will look odd.

Later, Aliya tells her that they will drop something on Prachi’s dupatta and then suggest washing it and then will follow her with the same excuse and exchange the dupatta.

However, Aliya’s plans fail as Ranbir captures Prachi in his arms and tells her to make him her personal lamp and he will become his jinn.

Rhea fumes in anger seeing Ranbir and Prachi together while Pallavi asks the waitress to send Ranveer to her room.

Later, Prachi warns Rhea to not play games with her.

Afterwards, Aliya tells Rhea that their plan to kill Sid has failed.