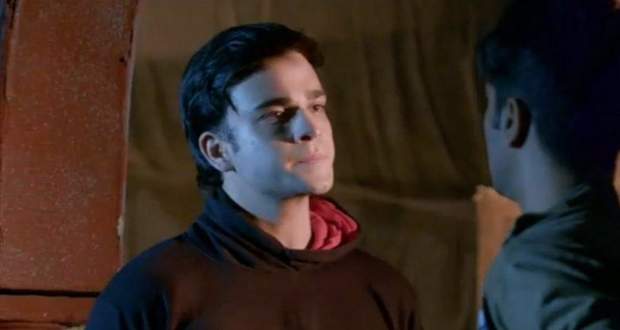 Today's Kumkum Bhagya 22nd April 2022 episode starts with Nick confessing that it was Prachi who planned out her murder attempt and abducted herself by hiring him.

A flashback appears of Aaliyah telling Nick to blame Prachi for the entire mess and kill her by finding a suitable chance.

Back to the present, while Prachi asks Nick to confess the truth instead of telling lies, Ranbir spots Tony pointing a gun toward Prachi from a distance.

Ranbir sees Tony firing the gun and jumps in front of Prachi which leads to him getting shot by the bullet.

Groaning in pain, Ranbir falls to the ground while the family members freeze in their spots with shock.

Prachi calls out for Ranbir in panic as tears make their way from her eyes, others also rush to admit Ranbir to a hospital.

At the hospital, Prachi insists on staying with Ranbir during the operation as she notices him holding onto her hand tightly.

However, the doctor refuses and takes Ranbir away into the operation theatre, leaving behind Prachi, Sahana, Pallavi, and Rhea.

Rhea puts up with her spotless act of wailing and crying for Ranbir while Prachi remains affixed to the door of the operation theatre.

Seeing Rhea’s condition, Pallavi insists she check herself with a doctor as she has been injured earlier.

Rhea breaks down into tears and denies leaving Ranbir’s side, making Pallavi feel bad and hugging her to comfort her.

Suddenly, Rhea walks away from there with Pallavi following after her while Prachi continues to cry on seeing Ranbir inside.

Remembering the flashbacks of a past event when Ranbir told Prachi that he will continue to be in incomplete love with her, Prachi regrets her behavior with Ranbir and asks him to wake up at the earliest.

Meanwhile, Nick comes into the house to take his money but gets grounded by Aaliyah and Rhea who pounce on him for firing on Ranbir.

Elsewhere, Pallavi blames Prachi for planning out everything and says that Prachi does not deserve to be a mother ever in this lifetime.