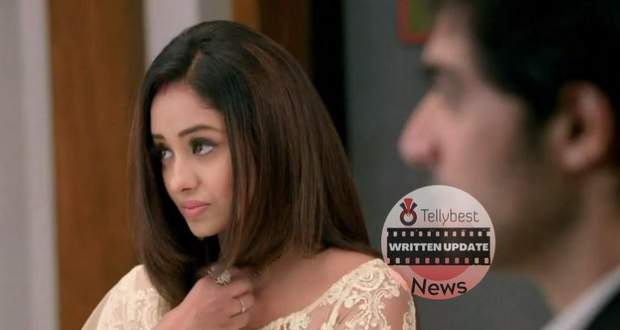 Today's Kumkum Bhagya 22nd August 2022 episode starts with Pallavi asking Siddharth how he could do such a thing with his own brother.

Pallavi says that it is the fault of Siddharth’s blood that he is so ungrateful and selfish just like his father.

Vikram tries to stop Pallavi but she brings Siddharth’s father by reminding Vikram about his elder brother who had an extramarital affair in the past.

Saying that the blood of Siddharth’s father is tainted as his son turned out to be just like him, Pallavi insults Siddharth.

Vikram almost raises his hand at Pallavi on hearing her words but still stops midway.

Meanwhile, Rhea bandages Ranbir’s wounds and tells him that she has always loved him and still does.

Ranbir tells Rhea that he does not love her and is in love with Prachi as he always has been and Rhea needs to understand that.

Alia comes and asks Ranbir not to act like a fool as Prachi is a liar who always had relations with Siddharth.

Rhea tells Ranbir to open his eyes and see who is on his side instead of blindly trusting Prachi as all evidence clearly is against her.

Without saying anything else, Ranbir asks Rhea and Alia to leave him alone as he needs some time to think things straight.

Meanwhile, Sahana comforts Prachi so that she does not stress herself and reminds her that Ranbir is on her side.

Prachi remembers Ranbir’s eyes when Siddharth spilled the truth and says that she saw something unusual.

Trying to confront him about the matter, Prachi comes to Ranbir and says that she has something to talk to him.

Ranbir asks Rhea to get out of the room as he and Prachi need privacy.

In the meantime, the goons come to the house searching for Alia as they want money for their work.

Alia refuses to give the money but then gives it after the goons begin to blackmail her.

Prachi asks Ranbir if he still believes her to which Ranbir says that he believes Prachi despite Siddharth’s statement.

However, Ranbir seems a bit hesitant while talking with Prachi which leads to the rise of suspicion in her mind.

Ranbir asks Prachi why she did not tell him about “her baby” earlier which shocks Prachi to an extent.

© Copyright tellybest.com, 2020, 2021. All Rights Reserved. Unauthorized use and/or duplication of any material from tellybest.com without written permission is strictly prohibited.
Cached Saved on: Friday 30th of September 2022 07:15:35 PMCached Disp on: Saturday 1st of October 2022 01:24:59 AM