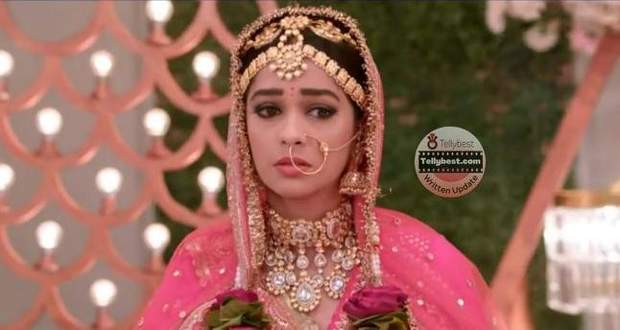 Today's Kumkum Bhagya 22nd December 2022 episode starts with Dida asking Sid if he does not want to marry Prachi to which Sid changes his words and says that he will do as the elders ask him to.

Dida asks Sid to go and fetch some water for her as she is tired of acting.

Ranbir and Rhea arrive and are shocked to see that the marriage has been stopped and Prachi is standing alone at the mandap.

Rhea starts to panic and asks Pallavi why Prachi and Sid’s marriage is not happening as it is getting late with each minute.

Pallavi tells Rhea that Dida had a heart attack suddenly and the only thing she cares about is marriage.

Making a disappointed face at Rhea, Pallavi goes to Vikram and tries to help him find the doctor’s number.

Ranbir rushes inside to see Dida with Prachi going after him but Alia stops Prachi to leave the mandap as the bride should not walk away from the mandap so much.

Prachi says that Dida’s health is not good and that is the only thing she cares about.

As Prachi leaves, Rhea goes after her and drags her away by holding onto her hand.

Ranbir enters Dida’s room and checks on her health after pushing away Sid from Dida’s side.

As Ranbir asks Dida what he can do to reduce her pain, Dida replies that she wants Ranbir to stop Prachi-Sid’s wedding.

Ranbir becomes silent and says that he cannot do so while Sid asks Dida to tell Ranbir that she is faking everything.

Ranbir gets angry on hearing Sid’s words and drags him away, making Dida anxious and she rushes after them to stop Ranbir.

Meanwhile, Rhea calls Prachi shameless for flirting with her husband’s brother on her wedding day.

Rhea asks Prachi to marry Sid quickly and leave the house as soon as possible so that they do not have to see her face again.

Prachi replies that she wishes the same for Rhea and gets pushed away by Rhea.

Prachi asks Rhea how dare she push her away and says that Rhea does not understand the point of being a mother as she is not pregnant.

Rhea shamelessly accepts Prachi’s allegation and says that Prachi will not succeed in revealing Rhea’s lie from the pregnancy test as she will be married to Sid by the time the reports come.

Rhea further challenges Prachi that she will just change the reports if they come just like Prachi’s fate.

At the same time, Ranbir beats up Sid while blaming him for ruining his and Prachi’s married life.

Sid says that he is being blackmailed by Alia and Rhea as they have kidnapped Mihika.

Ranbir does not believe in Sid’s words but Sid decides to make Ranbir hear his and Alia’s conversation.

Dida gets anxious as Ranbir takes Sid inside a room and goes to Vikram to call them there.

Alia calls Sid and asks him to come to the roof as she cannot let anyone else hear their conversation.

Dida asks everyone to stop Ranbir and Sid from fighting with each other.

As Prachi asks Dida to calm down, Dida reveals that she put on a fake act to stop the marriage.

© Copyright tellybest.com, 2022, 2023. All Rights Reserved. Unauthorized use and/or duplication of any material from tellybest.com without written permission is strictly prohibited.
Cached Saved on: Wednesday 25th of January 2023 10:03:02 AMCached Disp on: Tuesday 31st of January 2023 06:44:03 PM