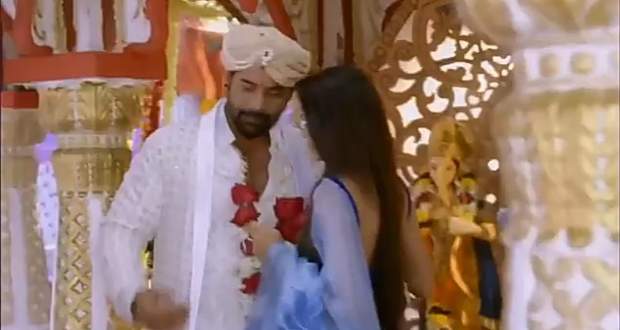 Today's Kumkum Bhagya 22 January 2021 episode starts with Pragya telling Abhi how much she missed him and again confesses her eternal love to him.

Abhi tells her that nothing can happen as they are divorced and tells the priest to proceed with the marriage Mantras.

Pragya removes the flower garland from Meer's neck and tells Abhi that he will happy to her and not Meera.

Abhi tells her that he will listen to her one last time and exchanges garlands with her while Meera gives her the engagement ring saying that it belongs to her.

Elsewhere, Aaryan goes after the priest while Baljeet and Saritha see him.

Baljeet tries to go after him while Saritha tells her to not bother him and goes inside the temple with her.

Aaryan gives him his phone and tells him to learn and recite the marriage Mantras for the wedding.

Elsewhere, Abhi reveals to Pragua that he did the fake marriage scene to get her to tell him 'i love you' which angry her and she ran after him due to which he is saved from the bullet that shooter shot at him.

Meera tells her that she didn't partake in any of the pre-wedding rituals and Pragya and Abhi patch up.

Pragua asks him why he signed on the divorce papers while the shooter calls the man and sends Pragya's picture which angers the man and he tells him to kill her also for double money.

Meanwhile, Aaliya taunts Purab and tells him that she is going to throw away all the unnecessary things from Abhi's room as she wants to decorate it for his first night with Meers.

Abhi tells Pragya that someone must have gotten his sign as he became a living dead body when she left him after which they proceed for the marriage.

The fake priest goes to Baljeet and Saritha and requests them to give their blessing to Ranbir and Prachi referring to them as children.

Elsewhere, the priest asks Abhi who is going to do their Gathbandhan while Prachi requests Meera to do it.

© Copyright tellybest.com, 2020, 2021. All Rights Reserved. Unauthorized use and/or duplication of any material from tellybest.com without written permission is strictly prohibited.
Cached Saved on: Tuesday 2nd of March 2021 02:10:54 PM