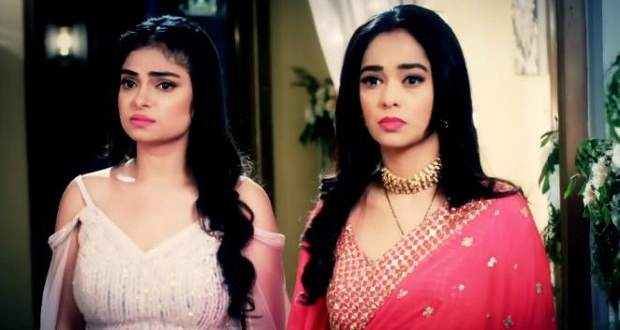 Today's Kumkum Bhagya 22nd June 2022 episode starts with Prachi crying as she feels betrayed by Ranbir and questions why her baby is not being treated the same as Rhea's baby.

Just then, Ranbir knocks on their door but Prachi closes the door on his face and tells him to leave.

The next day, Prachi gets surprised to see the house decorated.

A Mataji comes and blesses Rhea while Prachi also takes the blessing and the Mataji gives her a blessing to become a good mother.

However, the family interrupts and says that Prachi is not pregnant.

Pallavi tells Rhea the rituals going to happen later that day and sends her to rest until the singing ladies come.

After some time, Pallavi comes there and tells Prachi to go and bring Rhea downstairs.

Ranbir goes after Prachi and tries to talk to her but Prachi goes away ignoring him.

Further, Rhea mocks Prachi and asks her if she's feeling upset due to not being able to get impregnated by Ranbir before her.

Prachi is about to give a curt reply when Rhea feels nauseous and runs to the bathroom to vomit.

Prachi helps Rhea and gives her a napkin while Rhea uses this also to mock Prachi and tells her that she will never experience this as she's infertile.

Having enough of Rhea's taunts and insults, Prachi reveals to her that she is pregnant and became a mother before her.

Rhea refuses to accept this and Prachi makes her confirm that she's pregnant by putting Rhea's hand on her belly and making her feel the baby.

Meanwhile downstairs, Ranbir tries to tell Pallavi that Prachi is pregnant but gets interrupted by the guests.

The whole family gets shocked while Alia says that it's not possible.

Pallavi says that she will never accept Prachi's baby as the heir of the Kohli family and tells her to get lost.

Rhea tells Pallavi that Prachi feels jealous of her and demands she kick Prachi out of the house.