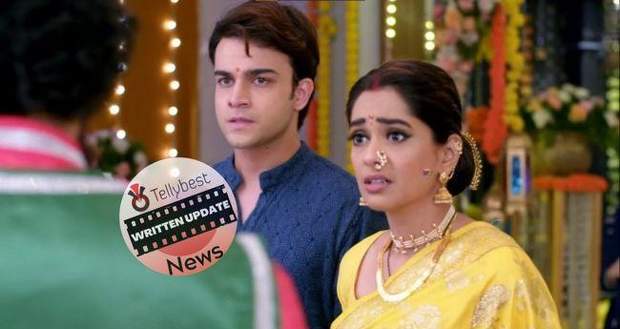 While Prachi looks at Ranbir with shock, Sahana informs her that the goons are indeed criminals.

In the meantime, Pallavi asks Ranbir whether whatever she has heard is true or not, and Ranbir nods.

While Alia announces that she will call the police, the goons start begging for forgiveness.

When Alia and Rhea order the goons to rub their nose on the floor to avoid the police, Prachi urges Alia to do the same since she is at fault too.

Hearing this, angry Alia announces that she will never do something so cheap but Ranbir also sides with Prachi by announcing that Prachi is right.

After Alia walks away feeling defeated, Prachi urges the goons to promise her that they will never do anything like this and they agree.

When Prachi turns to ask Pallavi for permission, Pallavi walks away angrily.

Later, Sahana goes to Prachi’s room to give her some milk and Prachi narrates the story of Ranbir saving her life.

Prachi further adds that she is sure Ranbir still loves her.

Hearing this, Sahana reminds Prachi that Ranbir is lying to himself and he will never acknowledge his feelings for Prachi.

However, Prachi ignores Sahana’s words and runs to talk to Ranbir about it.

Meanwhile, in the room, Ranbir looks at alcohol and starts saying how alcohol helps him to forget about reality.

He even starts thinking about how he will live without Prachi while tears stream down his cheeks.

On the other hand, Rhea yells that she cannot tolerate Ranbir’s love for Prachi anymore.

Hearing this, Alia tries to calm down Rhea by reminding her that Prachi will get married to Sid very soon.

This makes Rhea even more frustrated and she starts screaming that Ranbir may not let Prachi get married.

As expected, Alia advises Rhea to do something that will make Prachi leave the family.

She even adds that if Prachi confesses her feelings for Ranbir to Pallavi then Pallavi will get angry with Prachi.

Once Alia stops, Rhea announces that she will set fire to Prachi's heart by using an engagement dress.

Meanwhile, Prachi enters Ranbir’s room and urges Ranbir to talk to her.

Hearing this, upset Ranbir tells Prachi that she will get honest answers from his drunk state.

After that, Prachi and Ranbir get into an argument about who is right.

When Prachi asks Ranbir why he saved her, Ranbir lies that he saved Prachi for humanity nothing else.

Further, Ranbir adds that he does not love her anymore and she is free to start a new life with Sid.