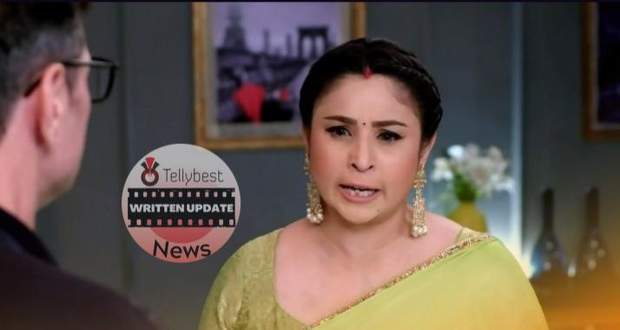 Today's Kumkum Bhagya 23rd August 2022 episode starts with Prachi asking Ranbir if he trusts in her or not.

Ranbir says that he is unable to decide what he should do and whom he should trust.

As Ranbir asks Prachi why she did not tell him about “her baby” earlier, Prachi’s eyes lose their glow and she understands Ranbir’s feelings.

Ranbir tells Prachi how he wanted to start their parenthood from the same house they lived in after marriage and was ready to leave everything for her.

Just the thought of Prachi carrying his child made him lose his mind in happiness.

Prachi tells Ranbir to give her a clear answer of yes or no and not drag the discussion further.

Ranbir says that he wants to trust Prachi but after hearing Siddharth and seeing the evidence he does not know what he should do.

Stopping Ranbir from talking further, Prachi says that it is the end of their relationship, love, and trust.

Prachi walks out of the room while Ranbir undergoes a mental breakdown as he cries while breaking and throwing things all over the room.

Coming to Sahana, Prachi cries on her shoulder while telling her how Ranbir is not trusting her this time too.

Sahana gets angry on hearing Prachi and takes off to get answers from Ranbir herself.

Meanwhile, Siddharth encounters Ranbir in the hallway and tries to explain to him but Ranbir bursts into violence.

On the other hand, Sahana searches for Ranbir everywhere to question him about his love for Prachi.

Siddharth blames Alia for trying to kill him and criticizes their personalities as human beings.

Rhea pushes Siddharth away as he tries to be aggressive with her and reminds him about his sister’s condition.

Reminding Siddharth about his stepsister from his father’s extramarital affair, Rhea says that he is a loser for having such a father.

Siddharth says that Rhea is the biggest mistake in his life and he hates her with his full guts.

However, Rhea and Alia laugh hysterically at Siddharth and act pitifully towards him for his condition.

Siddharth tries to slap Rhea but Alia stops him and pushes him to the floor.

With vengeful eyes, Siddharth tells Rhea that she is a disgusting daughter, wife, and sister.