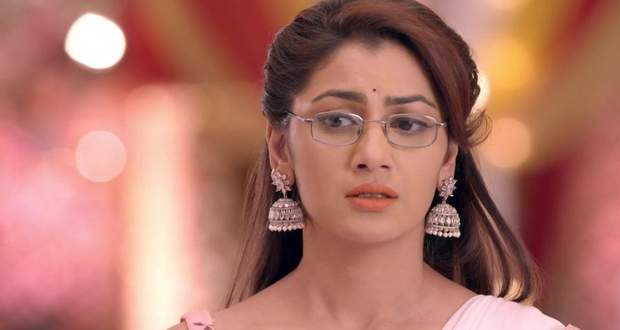 Today's Kumkum Bhagya 23 December 2020 episode starts with Pragya asking Saritha what to wear to Abhi's wedding and starts saying that she doesn't care about Abhi.

Pragya, Prachi, Sahana, and Saritha come to Abhi's house and introduces Prachi as her and Mr. Mehra's daughter to Aliya.

Aliya tells Pragya that she looks very happy and tells her to go meet Meera and Abhi.

A servant collides with Abhi and Pragya saying that it has Abhi's fault which sparks a banter between the two.

Pallavi tells Vikram to not disturb Ranbir and Prachi if he sees them together as Ranbir is going to break up with her tonight.

Sahana sees Ranbir and tells Prachi to look at him while he tells Rhea to talk with him and leaves with her.

Pragya helps Abhi choose an outfit where they taunt each other and she says that he was the one who always blamed her and pushed away.

Abhi asks her if she is upset because of his marriage while she says that she is very happy and leaves.

Sahana is talking with Rhea's friend who is about to reveal of Rhea and Ranbir's Roka when Aaryan come where and takes Sahana away.

Ranbir tells Rhea to not talk about their Roka to anyone until he reveals it to Prachi himself which upsets her and she tells him to do it as soon as possible.

Sahana tells Prachi that Ranbir is getting distant from her and advises her to flirt with him.

Elsewhere, Abhi pulls Pragya by her Saree and asks her what her heart wants to say.

She says that she is about his marriage and he leaves.

Abhi thinks that Pragya is hiding her feeling and goes but stops when he sees her talking to someone on the call.

Pragya convinces him that she is happy about his marriage by faking talking on the phone.