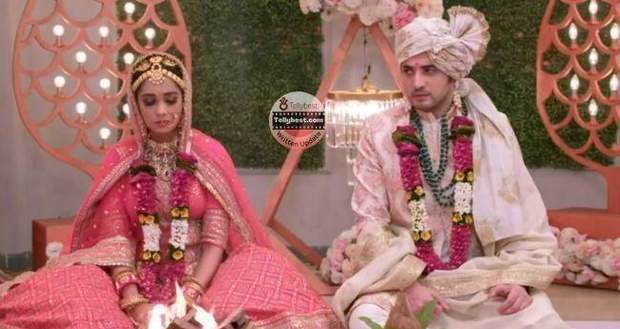 Vikram gets relieved after hearing it and Dida adds that she does not want Ranbir and Sid to fight each other.

On the other hand, while Ranbir orders Sid to reveal what Alia has done, Alia video-calls Sid, to show him the unconscious Mihika.

Alia orders Sid to marry Prachi as Mihika is hungry until he is married.

Looking at the scars on Mihika’s face, Sid growls at Alia for hurting Mihika but Aila orders him to marry otherwise the wounds will be deeper.

Ranbir who was watching it gets angry and snatches the phone away from Sid muttering that he will teach Alia a lesson.

When Sid tries to take his phone from Ranbir, both of them start pushing each other and Sid begs Ranbir not to do it.

Once Ranbir calms down, he questions Sid why he did not call the police and Sid reveals that he tried but Alia kidnapped Mihika again.

Ranbir even tells Sid that he never thought Alia and Rhea can stoop this slow and Sid announces they are very smart.

Looking away, Sid mutters sadly that sometimes he wishes he died in the plane crash then maybe he would not cause any problem in anyone’s life.

Alia video calls Sid at the same time to blackmail him to finish the marriage early if he wants to see his sister Mihika alive and as soon as Sid cuts the call, Ranbir informs him how hurt he felt when he used to see Prachi with Sid.

Ranbir even expresses his joy after realizing this baby is only his and Sid also mentions that he has seen Prachi’s love during the marriage preparation.

Feeling guilty, Ranbir tells Sid that he knows Prachi loves him very much and Sid also adds Prachi never mentioned the baby is his.

Ranbir then tells Sid that now Alia and Rhea will leave the house and he will bring Mihika now.

On the other hand, the Kohli family enters Ranbir’s room and gets confused when they find it scattered.

When Prachi mentions that Ranbir and Sid are on the terrace, Dida worriedly announces if the marriage is not stopped today, Ranbir will kill himself or Sid making everyone scared.

Meanwhile, on the terrace, Ranbir and Sid start fighting with each other as Ranbir wants to reveal the truth but Sid is against this.

The Kohli family enters the terrace just then and Pallavi gets scared looking at Ranbir and Sid fighting.

In the meantime, Alia orders Mihika to order Sid to get married while she records a video.

Mihika denies it by saying she will not force her brother to get married but Alia orders her to do it if she wants the water.

Alia watches as Mihika begs for water and she finally orders a goon to bring water for Mihika.

Looking at Rhea with fuming anger, Ranbir yells at her for ruining his life while Rhea looks shocked.

When Prachi urges Ranbir to let Rhea go, Ranbir lets out his frustration at Prachi for hiding this from him.

Meanwhile, the Kohli family members scold Ranbir for behaving like this but he continues scolding Prachi.

When Rhea mentions how Prachi has taken everything from her, Ranbir yells at Prachi for hiding the truth.

He tells her to reveal why he, Prachi and their child are separating.

© Copyright tellybest.com, 2022, 2023. All Rights Reserved. Unauthorized use and/or duplication of any material from tellybest.com without written permission is strictly prohibited.
Cached Saved on: Wednesday 25th of January 2023 11:42:39 AMCached Disp on: Monday 6th of February 2023 05:36:23 AM