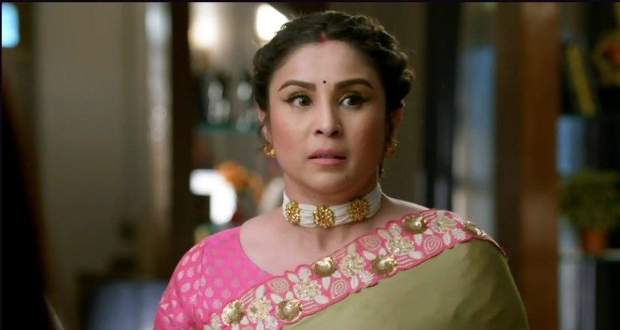 Today's Kumkum Bhagya 23rd February 2022 episode starts with Pallavi accusing Prachi’s character as dirty and insolent and does not know how to behave properly.

Prachi breaks down hearing Pallavi’s words and utters out how Pallavi poured water on her and erased her Kumkum.

On hearing Prachi’s words, Ranbeer gets shocked and asks Pallavi if Prachi’s statement is true.

Pallavi tries to cover up but Ranbeer expresses his dissatisfaction with Pallavi’s behavior and walks away from there.

Before Pallavi could resume her insults towards Prachi, Vikram stops her and asks everyone to rest in their rooms as it has been a long day.

In Prachi’s room, Ranbeer appears as Prachi was doing her hair in front of the mirror and tells her how she wants him to go away from herself but does not let others come near to him.

Prachi says she did everything to win her challenge against Rhea but Ranbeer mocks her sarcastically for giving that reason for going to such an extent.

With eyes still and calm, Ranbeer tells Prachi that he will do everything because of her as he might have fallen out of love.

After Ranbeer leaves the room, Prachi gets nauseous with stomach pain and rushes to the washroom to vomit.

The next day starts, Prachi gets woken up by a shattering noise and gets surprised to see Rhea willingly making that chaos to disturb her.

Ranbeer comes and Rhea gets chummy with him while hugging him tightly making Prachi close her room’s door in anger.

Later at breakfast, seeing Pallavi and Aaliyah caring extensively for Rhea, Dida comforts Prachi and tells her how much she loves her.

Prachi gives an excuse and leaves for the hospital to meet Dr. Madhu regarding her dizziness and stomachache but gets followed by Rhea secretly.

Rhea enters the hospital after Prachi who proceeds to meet with the doctor, unaware of Rhea’s presence.