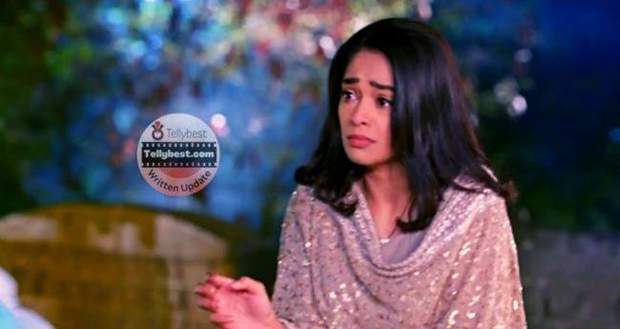 Today's Kumkum Bhagya 23rd January 2023 episode starts with the little girl telling Prachi that her Baoji will not like that look of her with all the makeup and glitter.

Prachi says that her Baoji has still not returned and her choice looks the best on her.

Meanwhile, the shopkeeper tells Ranbir that he knows everything about his daughter which is very uncommon for fathers.

Ranbir says that he cares for her and pays attention to everything she does or wears to know her choices.

An old lady comes to greet Prachi along with Sahana and reminds Prachi about making Halwa as prasad.

Prachi asks Mauli (the little girl) to follow Sahana and wait for her until she gets done with the preparations.

At the same time, Ranbir reaches home and encounters a small girl asking who did her makeup with purple eyeshadow and copper blush.

Pallavi says that Radha is looking good but Ranbir wipes off some makeup until he feels satisfied himself.

Dida asks Radha to follow her as she will make her wear the dress that Ranbir has brought for her.

Mauli comes to Prachi and tells her that her Baoji does not like her look while Prachi requests a man to let Mauli get dressed like that for the day.

Dadi comes to the man and asks him to let Prachi and Mauli be like that as Prachi sees her own daughter in Mauli.

Pallavi pats Ranbir’s back and tells him she knows that Ranbir sees his Panchi in Radha and that’s why he cares for her so much.

Ranbir says that Radha is the same age as Panchi as they were born on the same day, making Pallavi emotional.

The puja starts, and Prachi and Ranbir wash little girls' feet in their own houses while thinking of their daughter, Panchi.

Prachi thinks about Panchi and tells herself that she would have her daughter if it was not because of Ranbir.

Ranbir recalls holding Panchi and adoring her along with Prachi but tells himself not to think about her as Prachi is the reason why he lost Panchi.

While both Ranbir and Prachi imagine how their Panchi would look, a little girl is shown praying in the temple.

Suddenly, a woman comes and pulls the girl’s ear painfully dragging her out of the temple.

Khushi asks her mother to let go of her ear as Goddess Durga calls her as soon as the bells start ringing.

The woman brushes off Khushi’s words and tells her to sell each flower in her basket or else she will not get her dinner.

Khushi comes for 70 rupees change but her mother gives her 50 rupees intentionally so that she can fraud the customer waiting in the car.

The woman scolds Khushi and asks her not to scam people like that as their car leaves.

As Khushi asks for an explanation, her mother says that they need to save every penny as their food depends on that.

However, Khushi asks the next customer to give her 30 rupees as her mother does not know how to count.

On the other hand, Prachi appears as the CEO of a financing company and asks her secretary to decrease her mistake or else she will be fired.

© Copyright tellybest.com, 2022, 2023. All Rights Reserved. Unauthorized use and/or duplication of any material from tellybest.com without written permission is strictly prohibited.
Cached Saved on: Wednesday 25th of January 2023 08:45:43 AMCached Disp on: Sunday 5th of February 2023 02:44:14 AM