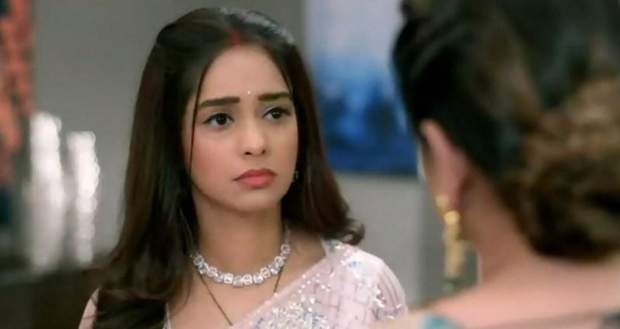 Today's Kumkum Bhagya 23rd June 2022 episode starts with Pallavi telling Prachi that even if she shows her the medical report then also she will not allow her child to be the heir of this family.

Pallavi then throws Prachi out of the house saying that she is shadowing the happiness of the family.

Just then Rhea's voice brings Prachi out of her reverie.

Rhea asks Prachi to take her down for which she has come to her room.

On coming down, Pallavi scolds Prachi for taking her time while Rhea explains to her that they were delayed because of her vomiting.

Prachi is feeling sad for her child who is not getting any blessings from anyone.

As Mataji ties a Kalawa on Rhea and Ranbir’s hands, Ranbir asks Mataji to tie one on Prachi’s hand too.

Rhea objects to it saying this veneration is only for their child and Prachi cannot be a part of it.

However, Mataji tells her that that is not true and invites Prachi to come and have it tied.

Later, Prachi gets happy to get the blessing.

Meanwhile, Dida asks Prachi to share her problems with her.

Prachi looks confused and asks Shahana if Dida knows about her pregnancy.

Shahana tells her that it's unlikely, as she wouldn’t have allowed things to go this far if she had known.

After a while, Mataji asks Rhea and Ranbir to seek the blessings of the elders.

Everyone participates in the celebrations and enjoys them while Prachi looks at them wistfully.

Afterwards, Rhea is made to sit on one side of the balance and another side is filled with sweets, toys, clothes, fruits etc to be donated to the poor.

Later, Aliya asks Ranbir and Rhea to dance together while Prachi uses the opportunity to get the fruit touched by everyone so that her child can get everyone’s blessings as well.

In her room, Rhea shares her happiness with Pallavi and Aliya.

Afterwards, Prachi also weighs herself on the balance and talks to her child.

Pallavi and Aliya observe Prachi on the balance and accuse her of cursing Rhea and causing misfortune.

Aliya tells Prachi that Ranbir does not care for her and will not stop her from leaving.

Prachi feels hurt and walks out from there.