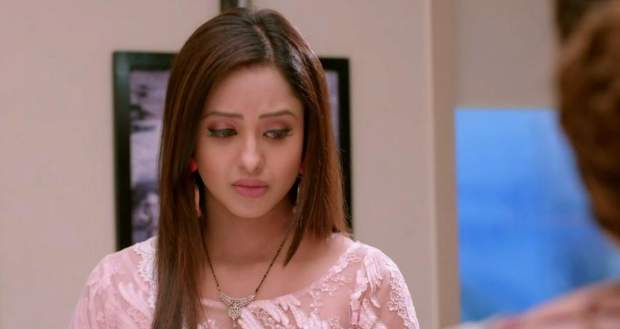 Today's Kumkum Bhagya 23rd May 2022 episode starts with Dr. Madhu sending Prachi home by threatening her that she will reveal Prachi’s pregnancy to Pallavi.

Pallavi acts uninterested when Dr. Madhu mentions Prachi’s secret but later comes back to her to find out about it.

However, Dr. Madhu refuses to disclose anything about Prachi due to professional ethics.

As Prachi enters her bedroom, the memories of her and Ranbir from the past flood her mind.

A flashback shows Ranbir planning their family together while wanting a daughter from Prachi.

Remembering these things, Prachi stares at Ranbir’s photo and requests him to come back home as soon as possible.

Prachi promises not to hurt him and convey "I love you" to him every day to the extent that he gets irritated.

Morning arrives with Pallavi and Rhea barging into Prachi’s room while shouting her name and throwing her on the floor.

Pallavi shouts that Ranbir is dead because of Prachi with Rhea joining in with her.

Prachi gets traumatized on hearing this and screams awake into reality realizing that it was a dream.

With trembling hands, Prachi calls Vikram and asks him about Ranbir’s condition.

Vikram replies that Ranbir is better than earlier when suddenly the nurse informs them that Ranbir has regained consciousness.

Hearing that, Prachi gets happy and rushes into the washroom as she feels nauseous.

Meanwhile, Ranbir refuses to see anyone before Prachi which leaves Pallavi with no choice but to call Prachi to the hospital.

Rhea leaves to bring Prachi on Pallavi’s instructions and drives rashly as memories of Ranbir rejecting her flash in her mind.

On the other hand, Prachi gets ready to go to the hospital and expresses her excitement about telling Ranbir about her pregnancy.

Prachi declares that she is ready to devote herself to Ranbir and love him with all her heart.

Rhea drops the bottle from her hand on hearing Prachi’s words.