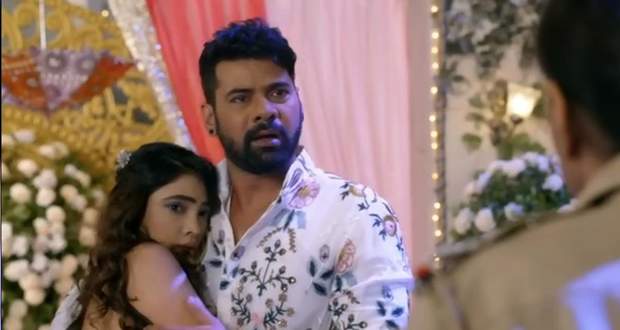 Abhi starts flirting with Pragya and she tells him that it is their Kumkum Bhagya which brings them back together.

Pallavi goes to Ranbeer’s room to call him, while Vikram feels proud of Pallavi’s love and bonding with their son Ranbeer.

Pallavi makes a call to Ranbeer and asks him to come back home soon. Ranbeer says bye to Prachi and leaves for his home.

Later, Prachi mutters that she can never forgive Rhea for trying to hurt Pragya. She calls Rhea to wish her happy Diwali but Rhea couldn’t talk to her.

Everyone in the Mehra house gets worried and Rhea doubts Aliya for hurting Pragya. Abhi clears her misunderstanding and tells everyone that the police has arrived in the house.

Pragya opens the main door and police enters the house to arrest Rhea for an attempt to murder Prachi.

Police tell them that Bittu has confessed that Rhea gave money to Sanju for killing Prachi. Abhi takes a stand for Rhea and asks them to not to arrest her.

Aliya argues with the police inspector and doesn’t let them arrest Rhea. Abhi calls the police commissioner for help but he couldn’t hear his voice.

The lady police officer informs them that Pragya has filed an FIR against Rhea, while Pragya completely denies to it.

Rhea starts crying and asks Abhi to save her. The police take Rhea from the Mehra house, while Aliya blames Pragya for lodging FIR against Rhea.