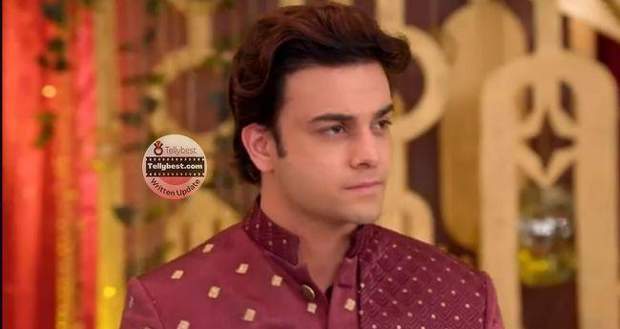 Today's Kumkum Bhagya 23rd November 2022 episode starts with Ranbir and Prachi welcoming Dr. Preeti to the party and introducing her to the entire family.

Prachi says that she called Dr. Preeti so that she can announce the results of Rhea’s DNA test that was done earlier.

Pallavi asks the doctor to tell them if the DNA has matched Ranbir or not while everyone anticipates the doctor’s revelation.

Dr. Preeti says that Rhea’s DNA has matched Ranbir’s perfectly and it is confirmed that Rhea is carrying Ranbir’s child.

Rhea smiles evilly upon hearing the doctor while Prachi remains shocked as she processes the announcement.

Prachi asks Dr. Preeti if she is sure and says she does not believe in the results as they cannot be true.

Rhea stops Prachi from talking and tells her that she has gotten what she wanted and has no right to question the validity of her pregnancy.

Prachi says that she knows Rhea is not pregnant with any person’s child and questions the credibility of the report.

Pallavi asks Prachi to shut up as she will not hear her nonsense for one more second against Rhea.

Alia adds fuel to the fire by saying that it is Prachi who is constantly trying to insult Rhea by questioning her pregnancy.

As Pallavi asks Prachi to apologize to Rhea, Prachi refuses to do so as she is telling the truth and leaves.

Rhea threatens that she will leave the house with her child if Prachi does not apologize to her.

Ranbir comes to talk with Prachi and assures her that he is on her side despite the DNA results showing something else.

Prachi asks Ranbir to give her some private time so that she can cool down her anger.

Meanwhile, Rhea explains to Alia her plan in which she exchanged her sample with Prachi’s so that the report comes as positive.

Alia compliments Rhea’s brilliant plan when suddenly Pallavi comes there and Rhea changes her acting to being a sad wife.

Pallavi assures Rhea that Prachi will have to apologize to her or else she will lose her relationship with Pallavi.

Sid overhears that conversation and asks Prachi to apologize to Rhea before the situation gets out of their hand.

After gathering all the family members, Prachi attempts to apologize to Rhea but Alia interrupts her by saying that Prachi is wrong while Rhea is right.

© Copyright tellybest.com, 2022, 2023. All Rights Reserved. Unauthorized use and/or duplication of any material from tellybest.com without written permission is strictly prohibited.
Cached Saved on: Wednesday 23rd of November 2022 11:20:11 PMCached Disp on: Friday 9th of December 2022 05:10:27 AM