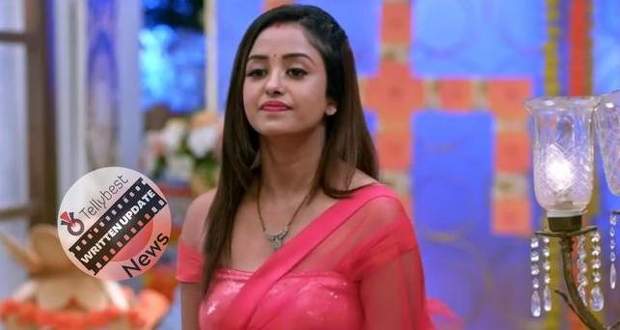 Today's Kumkum Bhagya 23rd September 2022 episode starts with Ranbeer telling Prachi that he has no feelings for her.

He further tells Prachi that since Sid is the father of Prachi's baby, she and Sid can even shift to London.

Ranbeer tears Prachi's heart apart by saying he wants her here with his baby, not to see her carry a betrayal baby.

Ranbeer leaves the room and starts his car with alcohol running in his veins.

Drinking alcohol like it is nothing, Ranbeer loses the balance of the steering wheel and almost crashes into another car.

He comes out of the driver's seat and sits on the road with his knees tucked to his chest, saying he is nothing without Prachi.

Meanwhile, Sid comes into Prachi's room while Prachi says she hates him and can never love him.

She further asks Sid how could he say that she is carrying his baby in front of Ranbeer when Prachi always treated him as a brother.

Prachi becomes insistent and says she deserves to know why Sid did what he did on that day.

Alia watches their interaction from outside and Sid leaves without telling Prachi the reason.

Prachi shuts the door in Alia's face with Rhea entering it a second later with a saree.

Rhea tells Prachi she must get ready mentally to get engaged to Sid while creating a drama outside saying Prachi steals Rhea's every man.

Rhea states that when Rhea was married to Sid, Prachi got pregnant and now that Rhea is happily married to Ranbeer, Prachi cannot digest Rhea's happiness.

Prachi says what rubbish is Rhea saying while Shahana supports Prachi saying since Rhea is rubbish, only rubbish will come out of her mouth.

Like an evil woman, Rhea persistently asks Prachi to prove that she only cares about Kohli Household, forcing Prachi to say that she has no love and feelings toward Ranbeer.

Shahana calls Rhea a 'chudail' while Rhea laughs darkly saying she is indeed a big 'chudail.'

Meanwhile, Prachi gets out of the Kohli Mansion and says all of this is happening due to Ranbeer.

She came to this house to seek revenge on him but he started to change and love her.

Suddenly white light flashes on Prachi's face and it is Ranbeer who has returned home drunk.

Prachi asks Ranbeer to stay away from her but she sees a wound on his hand and puts first aid on it while Sid watches these two lovers care for each other with tears in his eyes.

© Copyright tellybest.com, 2020, 2021. All Rights Reserved. Unauthorized use and/or duplication of any material from tellybest.com without written permission is strictly prohibited.
Cached Saved on: Friday 30th of September 2022 05:54:14 PMCached Disp on: Saturday 1st of October 2022 05:57:44 PM