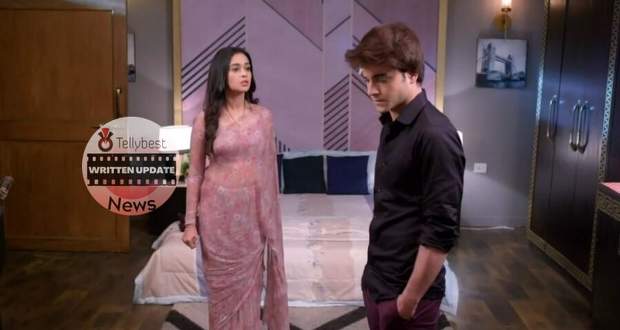 Today's Kumkum Bhagya 24th August 2022 episode starts with Alia and Rhea laughing at Siddharth and making fun of him for helping them.

Siddharth says that they have ruined his life and he just wants his sister back from them.

Threatening Siddharth, Rhea says that they will take care of his sister until Ranbir accepts Rhea as his wife.

Siddharth curses Rhea that even if she succeeds in separating Prachi from Ranbir, she can never be closer to Ranbir.

Rhea slaps Siddharth on hearing that and warns him that his sister’s life depends on how he behaves.

Siddharth gets silent as he wants to save his stepsister who has been abducted by Alia and Rhea.

Sahana hears some noises from Alia’s room and gets closer to hear what they are talking about.

To Sahana’s shock, she discovers how Alia and Rhea are blackmailing Siddharth to lie to the whole family.

Sahana decides to let Ranbir and Prachi know the news as soon as possible but accidentally pushes off an artifact from the table.

Alia and Rhea panic on hearing the noise and come outside the room to check if someone is there.

Sahana succeeds in avoiding them by hiding in a corner and rushes off to convey the situation to Ranbir and Prachi.

In the meantime, Ranbir drives under alcohol influence and almost gets into an accident.

On not being able to find Ranbir anywhere, Sahana decides to tell Prachi first but finds Prachi nowhere in her room.

Sahana asks Pallavi about Ranbir’s whereabouts while Pallavi starts to convey the honest feelings she had for Prachi and her child.

Pallavi curses Prachi and says that she should stay wherever she is instead of coming back home.

Sahana tries to call Prachi as she gets worried about not being able to find Prachi anywhere but finds Prachi’s phone in her room.