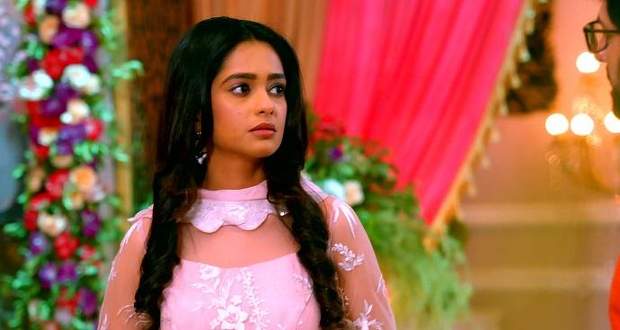 Today's Kumkum Bhagya 24 December 2020 episode starts with Suhana telling Prachi to flirt with Ranbir as he is coming towards them.

Prachi winks at him and he humiliates her for it and she leaves. Prachi cries in the kitchen while Suhana consoles her and goes to confront Ranbir.

Elsewhere, Meera goes to wear the necklace but sees that it is different from the one she chose and gets confused.

Two of the goons are running away from the police while Ranbir gets drunk.

Ranbir berates himself for hurting Prachi while Aaryan tries to pacify him.

Sahana comes there with Prachi behind her while Aaryan also leaves. Prachi tells Suhana to go as well.

Meanwhile, Pragya tells Meera to wear the necklace while Abhi comes there and compliments her which hurts Pragya.

The goons steal a car and call Goga Bhai who is revealed to be the waiter who bumped into Abhi.

Goga Bhai tells them to come to Abhisekh Mehra's house and says that the necklace is on Meera's neck.

Ranbir apologizes to Prachi and berates her as to why she didn't get mad at him when he flirted with another girl and cries.

Meanwhile, Rhea looks for Ranbir and hears his voice with Prachi outside the room.