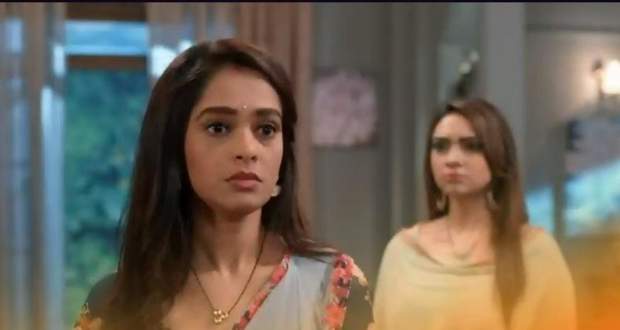 Today's Kumkum Bhagya 24 Jan episode starts with Sahana trying to tell Ranbeer about the truth of the pregnancy.

Ranbeer tells her that she can keep it to herself if Prachi has told her to not disclose this matter to him.

Sahana gets emotional on hearing Ranbeer’s support for the child.

She tells him that she is perplexed at the thought of whether she should tell the father of the child about the pregnancy or not.

On hearing Sahana, Ranbeer wipes off her tears and asks her to do what her heart wants and he will support her in whatever decision she makes.

Sahana rushes to Prachi’s room and tells her to expose the secret of her pregnancy to Ranbeer as he has the right to know.

Prachi, although resistant at first, decides to agree with Sahana’s suggestion and walks to Ranbeer’s room with Sahana to tell him the truth.

However, before Ranbeer can open the door, Prachi tells Sahana that the last time he saw Prachi and Siddharth together in a bed so he might not trust the truth.

Ranbeer opens the door for Sahana and Prachi and asks them what the matter is, Prachi asks Sahana to declare the truth in front of Ranbeer.

Sahana gets confused and runs off from there, Prachi tells that she wanted to say that she does not need a father to grow up her child.

Ranbeer does not give a reaction and closes the door on Prachi’s face, Rhea sees this and gets overjoyed.

The next day, Rhea tells Aaliyah and Pallavi about last night and laughs about it, all congratulating each other for Lohri.

Prachi comes and takes a blessing from Vikram who gives her his blessing shocking everyone.

Ranbeer acts all chummy to Rhea and ignores Prachi although she was in front of him.

Sahana sees this and gets upset, Dida comes and cheers her up through her words.

Upcoming KKB episode updates: Prachi gets ready for Lohri, Rhea challenges Prachi that Ranbeer will always belong to her.