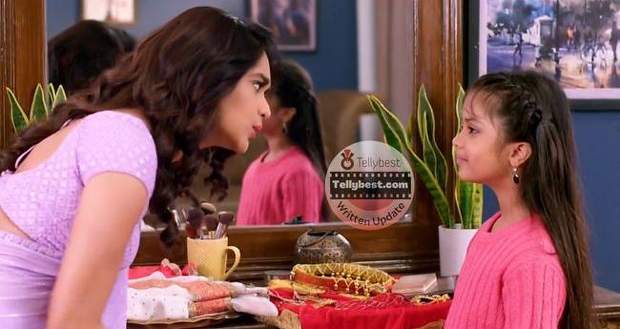 Today's Kumkum Bhagya 24th January 2023 episode starts with Prachi settling down in her office cabin as her secretary briefs her about that day’s internal affairs and schedule.

The peon gives Prachi her coffee while Prachi notices an employee standing under a shelf where a box is about to fall.

Prachi quickly runs to save that employee and pulls her away as the box crashes on the ground with a thud.

Making the girl sit on a chair, Prachi asks others to bring the first aid box immediately so that they can treat her foot.

The girl assures Prachi that she is fine but Prachi applies medicine on her injured feet and asks the staff to check the CCTV to see who kept that box there.

Priya informs Prachi that the Chairman is waiting for her at the meeting after which Prachi goes to attend.

The female employee asks Priya why everyone says that Prachi is very strict and Priya explains to her that she will get to see Prachi’s that avatar soon if she messes up her work.

Priya says that even though Prachi can be strict sometimes, she cares deeply for everyone.

Prachi enters the conference room and tells the chairman why he did not come to the puja in a little voice.

The chairman introduces Mr. Galore to Prachi who complains about an old lady not giving up her house due to which their project is stuck.

As the chairman says Prachi will solve the problem, Mr. Galore says he does not trust a woman’s capability in this matter.

Prachi says that she will carry out the task herself while Mr. Galore says that he will offer the position of chairperson in his company if Prachi succeeds.

Prachi refuses to take the position and instead asks Mr. Galore to respect women a bit as his mother and sisters are also women.

Meanwhile, Mai (Khushi’s mother) takes Khushi to someone’s home as they are feeding small girls and giving them gold coins.

However, as Khushi sits with other girls, the woman pulls her up from her position and asks her to get out as she has dirty blood with no parentage.

Khushi says that she has the same blood as others after which the staff there throws out Khushi and her Mai.

Suddenly, a fire breaks out inside the house and the woman’s daughter, Nisha gets stuck in that.

Khushi comes back and saves Nisha by courting her out of the fire with a wet blanket.

Stopping Khushi from leaving, the woman applies medicine to Khushi’s foot and notices the moon and star birthmark.

The woman apologizes to Khushi for her behavior and gives her the gold coin which gets snatched away by Mai later.

At the same time, Prachi embraces the moon star pendant and says she still misses Panchi every day.

Coming to Ranbir and Aryan who attend an auction to get land, another man named Sandeep Thakur snatches away their deal.

Ranbir tells Aryan that Sandeep is intentionally doing that as they have encountered him many times already.

While coming to Sandeep to talk, Ranbir hears him talking to Alia on his phone and gets violent.

Sandeep tells Ranbir that Alia will destroy him completely by taking away his last straw, that is, his job.

© Copyright tellybest.com, 2022, 2023. All Rights Reserved. Unauthorized use and/or duplication of any material from tellybest.com without written permission is strictly prohibited.
Cached Saved on: Wednesday 25th of January 2023 08:49:16 AMCached Disp on: Wednesday 1st of February 2023 09:42:33 PM