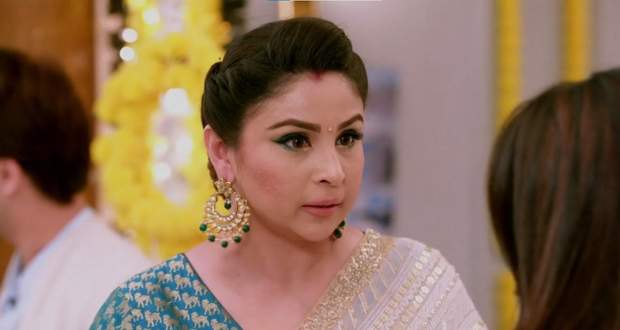 Today's Kumkum Bhagya 24th June 2022 episode starts with Sahana trying to strike back at Alia and Pallavi after they insult Prachi ruthlessly.

However, Sahana goes silent as the topic of Prachi being pregnant comes up which gives Alia an upper hand.

Ranbir comes down after Pallavi and Alia leave making Sahana feel extremely angry towards him.

Meanwhile, Prachi roams around the streets aimlessly while tumbling onto vehicles unintentionally.

Finally, Sahana confronts Ranbir about his love for Prachi and asks him why he always hurts Prachi like that.

Ranbir gets confused on hearing Sahana and asks her what the matter is.

On getting to know about Prachi leaving after hearing Pallavi and Alia’s insults, Ranbir storms outside in search of Prachi.

In the meantime, Prachi comes in front of a car and faints from shock making everyone on the road concerned.

After some time, Prachi regains her consciousness and continues to walk aimlessly without seeking any help.

Ranbir shouts Prachi’s name on the streets and visits the temple in the hope of finding her there.

However, Ranbir does not spot Prachi at the temple and breaks down into tears while kneeling in front of the god.

Ranbir asks the god to stop making Prachi suffer and suddenly thinks of a place where Prachi can be.

On the other hand, Alia congratulates Rhea on making their plan successful by faking her pregnancy and hugs her in happiness.

Suddenly, both Rhea and Alia hear some footsteps and discover an earring which they conclude belongs to Sahana.

Alia finds Sahana crying by herself and dismisses her thought that Sahana might have overheard them.

Meanwhile, Prachi arrives at the apartment in which she and Ranbir used to live and remembers a certain flashback.

In the flashback, Ranbir acts very playfully and excited about naming their future kids and proposes names like Ritwik and Purvi.

Prachi tells Ranbir that his parents will approve of their relationship once they have a child together.

Back in the present, Prachi sheds tears while sitting alone in the house.

At the same time, Rhea reveals to Alia that she is pregnant with Ranbir’s child in reality and is not lying about it.

© Copyright tellybest.com, 2022, 2023. All Rights Reserved. Unauthorized use and/or duplication of any material from tellybest.com without written permission is strictly prohibited.
Cached Saved on: Monday 21st of November 2022 05:41:22 PMCached Disp on: Monday 5th of December 2022 02:25:32 PM