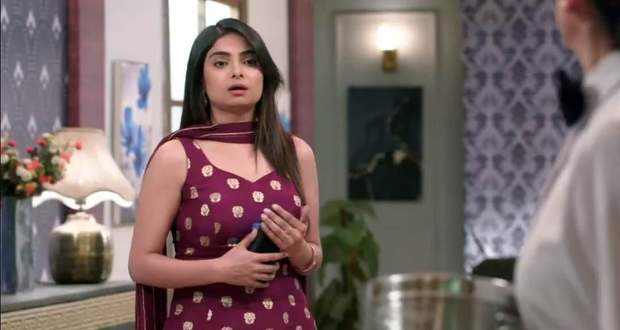 Today's Kumkum Bhagya 24th March 2022 episode starts with Prachi taking back her handmade karah for Sahana and discovering her absence from the room.

Prachi picks up Dida’s note and decides to give the drink there to Sahana.

Meanwhile, Ranbeer comes into his room and announces to Rhea they cannot stay together in one room.

Rhea acts naïve and asks Ranbeer if he wants any adjustments but Ranbeer refuses everything asking her to go out of his room.

On her way to Sahana, Prachi hears Ranbeer and Rhea’s conversation and struggles to decide whether to help Ranbeer.

However, on remembering the scene of Ranbeer and Rhea together, Prachi withdraws her steps and leaves, making Ranbeer disappointed.

Rhea refuses to leave the room as Pallavi was the one who brought her there so Ranbeer agrees to let her stay there.

Instead, he leaves the room himself saying he still loves Prachi and will not live with anyone else.

Prachi and Dida somehow handle Sahana while she goes crazy in the drugged state.

Later, Ranbeer asks for help from Prachi by letting him stay in her room for one night which Prachi refuses.

Ranbeer tries to convince Prachi to trust him once but fails as Prachi walks off without agreeing to his condition.

Later at night, Prachi thinks about Ranbeer’s words and unlocks her door in the hope that Ranbeer will come and sleep when needed.

Ranbeer comes to the door but leaves without entering as he decides to enter the room after proving himself innocent.

On the other hand, Rhea discloses the whole matter between her and Ranbeer to Aaliyah and gets concerned about how to gain Ranbeer at her side.