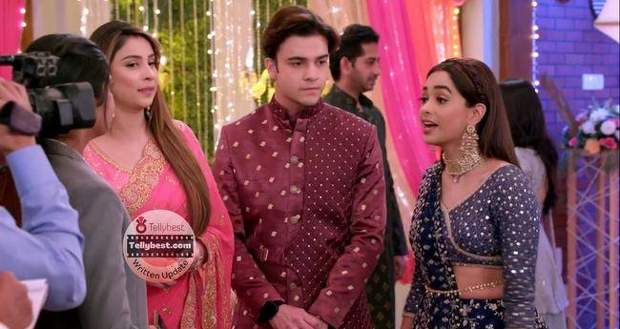 Today's Kumkum Bhagya 24th November 2022 episode starts with Rhea asking Prachi to apologize to her in front of everyone for insulting her and conducting the test.

Alia says that Prachi is constantly trying to prove Rhea wrong, but the reports have shown that Rhea is right.

Prachi says that she is still not convinced that Rhea’s baby belongs to Ranbir and wants to conduct another DNA test.

Surprisingly, Rhea agrees to a second DNA test as she knows how to switch the samples.

However, Rhea says that she will agree to the second test only when she hears Prachi apologizing to her.

Prachi remains silent while Rhea announces that she will leave the house if Prachi refuses to say sorry to her.

Rhea walks off and comes back with her suitcase while Pallavi, Alia, and Vikram request Prachi to say sorry to Rhea.

Prachi bows in front of Rhea’s manipulative drama and says that she is sorry for challenging Rhea and hurting her feelings.

Rhea feels victorious upon hearing Prachi’s apology while Prachi walks away from there.

Ranbir tries to go after Prachi but Alia stops him and asks him to be with Rhea as it is proven that she is bearing his child.

Ranbir stops himself from worrying about Prachi for a moment.

Sid comes after Prachi and comforts her for her saying sorry to Rhea even if it was not her mistake.

Sahana comes and informs Sid and Prachi that she has figured out where the goons have kept Mihika.

After hearing the entire situation at home, Sahana suggests they save Mihika from the goons by hijacking their base.

Prachi swears to end Rhea’s game that night and leaves with Sahana and Sid but Pallavi stops them.

Sid gives Pallavi the excuse that he and Prachi are going to meet an international client and will be back soon.

Alia hears that and gives Rhea the idea to sow a seed of suspicion between Ranbir and Prachi by using the fact that Prachi and Sid went to the hotel together.

Rhea understands Alia’s plan and says that they have to break the trust between Ranbir and Prachi to succeed.

Later, Rhea comes to Ranbir and asks him why he blindly trusts Prachi when she is not in love with him.

Rhea reminds Ranbir that Prachi is carrying Sid’s child and will marry him soon but Ranbir says that he does not care whose child Prachi bears as he loves her as she is.

To instigate Ranbir, Rhea tells him that Prachi and Sid have gone to the same hotel together by lying that they are meeting a business client.

Ranbir gets a bit taken aback by hearing Rhea and walks out of the room to check the situation himself.

© Copyright tellybest.com, 2022, 2023. All Rights Reserved. Unauthorized use and/or duplication of any material from tellybest.com without written permission is strictly prohibited.
Cached Saved on: Wednesday 23rd of November 2022 11:18:34 PMCached Disp on: Friday 9th of December 2022 04:08:25 AM