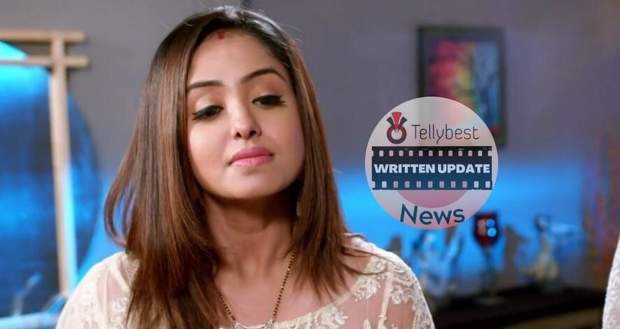 Today's Kumkum Bhagya 25th August 2022 episode starts with Sahana finding a letter from Prachi on the table and discovering that Prachi has left the house.

Prachi writes that she feels that Ranbir does not love her at all while she blindly trusts him, that is why she has decided to leave Ranbir alone.

Sahana gets mortified after reading Prachi’s letter and panics thinking about where Prachi would have gone so late at night.

As Ranbir cannot be found anywhere, Sahana decides to ask Aryan for help in finding Prachi.

On her way, Sahana bumps into Rhea and asks her to shut up as everything is happening because of her.

Sahana tells Rhea that women like her should not exist as they only know how to destroy others’ lives.

Rhea tries to show Sahana her place but gets elated on hearing that Prachi has left the house because of the allegations.

As Sahana questions Rhea about instructing Siddharth to lie, Rhea gets a bit nervous but regains her composure while denying such a thing.

Rhea dances to celebrate Prachi’s exit from the house and comes to Prachi’s room to check for herself.

After confirming that Prachi is nowhere to be seen, Rhea enjoys her victory and hugs Ranbir’s photo while saying how she loves him.

Rhea decides to throw out Prachi’s belongings and shift her things to that room as she will be using them from now on.

Alia also feels joyous after hearing that Prachi has left the house and congratulates Rhea.

Meanwhile, Prachi stumbles around the roads and passes Ranbir without noticing him lying unconscious in his car.

A man approaches Prachi and asks her if she needs any help but Prachi gladly denies it.

However, the man suddenly calls his men and grabs Prachi while covering her face with a black mask.

Prachi screams for help while Ranbir faintly wakes up only to lose his senses again.

Sahana comes by shouting for Prachi and tries to wake up Ranbir after spotting him unconscious in his car.

As Sahana proceeds, she watches a few men loading a woman in a truck and runs to stop it but the truck leaves.

On finding Prachi’s bracelet, Sahana understands that the woman was Prachi and calls for help to save her.

Prachi finds herself with other girls who have been kidnapped and will be sold by the kidnappers.

© Copyright tellybest.com, 2020, 2021. All Rights Reserved. Unauthorized use and/or duplication of any material from tellybest.com without written permission is strictly prohibited.
Cached Saved on: Sunday 2nd of October 2022 09:42:47 PMCached Disp on: Wednesday 5th of October 2022 06:14:47 PM