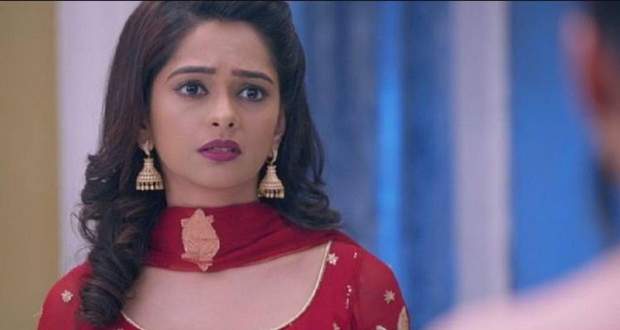 Today's Kumkum Bhagya 25 December 2020 episode starts with Rhea hearing Prachi and Ranbir's voice but going away when she sees that the door is locked.

Rhea sees Suhana and thinks that Ranbir and Prachi are together while Aaryan reveals Ranbir's situation to her.

Meanwhile, Ranbir tells Prachi that he loves her and will always love her no matter what while feeling dizzy.

Ranbir falls on the bed and takes Prachi with him while Rhea comes there and misunderstands the situation.

Rhea starts taunting her and reveals that she and Ranbir are going to get engaged which leaves Prachi in shock and she runs away.

Aaryan rebukes Rhea for accusing Prachi of trying to take advantage of Ranbir while Prachi cries in the middle of the road.

Meanwhile, Pragya cries remembering the promise Abhi made to her in the past.

Abhi comes there but she leaves while Meera comes to him and says that she can't wear the necklace.

Abhi tells her that the necklace must have been with them by mistake and tells her to wear it today for Rhea's happiness and that he will give the money for the necklace later.

Suhana pacifies Prachi and takes her inside while the goons dress up as waiters and look for Meera.

Saritha has a heartful conversation with Pragya.

© Copyright tellybest.com, 2020, 2021. All Rights Reserved. Unauthorized use and/or duplication of any material from tellybest.com without written permission is strictly prohibited.
Cached Saved on: Saturday 23rd of January 2021 06:58:43 AMCached Disp on: Tuesday 26th of January 2021 07:07:53 AM