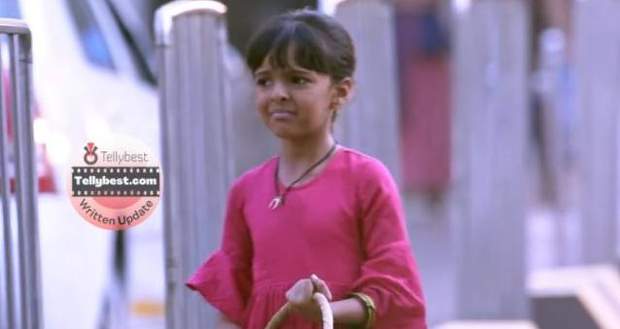 Today's Kumkum Bhagya 25th January 2023 episode starts with Prachi saying that a home is built with the emotions of the family members, let it be happiness, sadness, or moments of both enjoyment and sorrow.

The old lady agrees with Prachi’s words while Prachi looks around the house and points out objects like the photo frames and the antique chair.

Prachi says the scratches on objects must be done by her children as she has also done similar things in her childhood.

Prachi tells the old lady that no one has the right to snatch her home from her and tells her that they will restore everything as it is to her new flat.

The employee tells Prachi that something like that will cost a lot but Prachi says that they will move on with that and takes the sign of the old lady.

Prachi tells the old lady that she is helping other people greatly to get their own homes where their children can grow up.

Meanwhile, Ranbir enters his house and spots Pallavi and Dida praying for him to get that deal as he has not got any project for a long time.

As Pallavi and Dida ask Ranbir how the tender went and if he has got the deal, Ranbir lies and tells them that he got the deal.

Pallavi and Dida’s faces light up as they congratulate Ranbir and go to bring carrot halwa for him.

Feeding Ranbir and Aryan themselves, Pallavi and Dida say that they were sure that Ranbir will surely get the deal.

After they leave, Aryan asks Ranbir why he lied to them to which Ranbir replies that he wants to see them happy.

Ranbir tells Aryan that he will soon make the lie into truth as he now knows how Alia’s men are trying to ruin his deals.

Back to Prachi, Ashok (the Chairman) compliments Prachi and announces that he will reward her for being such a good employee.

Ashok says that Prachi will join the Delhi office as she is the most capable person to head that branch.

However, Prachi refuses to go to Delhi as Ranbir lives there and she does not want to look back to her past.

Ashok fires Prachi after she rejects his offer as he thinks that Prachi has insulted him by not abiding by it.

Prachi packs her things and leaves the office as she can never go back to Delhi to face Ranbir after whatever happened.

At the same time, Ranbir gets sad thinking about Panchi when Khushi stops by his car and drops a rose on his lap.

Before Ranbir can turn around, Khushi runs away with Ranbir only catching a glimpse of her back.

As he opens the note with the flower, Ranbir smiles after reading the message that asks him to smile as it does not need tax.

Khushi wonders if Ranbir smiled after reading her note while Ranbir feels happy after seeing the rose.

Prachi comes back to her house and locks herself as Sahana asks if she is not going to Delhi because of Ranbir.

Ranbir imagines Prachi welcoming him into his house and questions himself why he is thinking about Prachi again.

On the other hand, Khushi asks Mai to give her food but she asks her to go outside to beg for something from the neighbors.