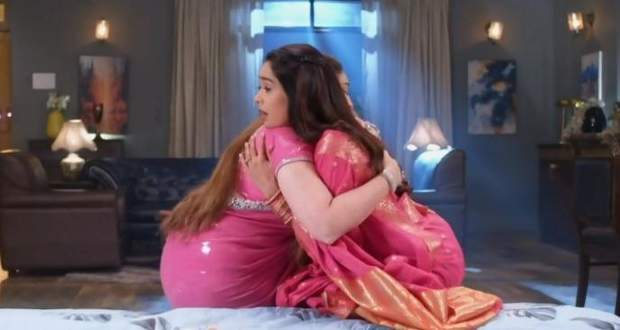 Today's Kumkum Bhagya 25th July 2022 episode starts with Pallavi telling Rhea that she is playing nice to Prachi to win her trust so that she can take away her child after its birth.

She asks Aliya to look after Rhea in the meantime.

Rhea asks Aliya if they should trust Pallavi while Aliya tells Rhea that behind such great planning lies Pallavi’s festered anger.

Meanwhile, Ranbir hugs Shahana with happiness and expresses his happiness to Dida and Vikram.

Pallavi pretends to look happy while Ranbir thanks her for making Prachi stay.

Pallavi tells Prachi that she has done all this for selfish reasons.

Ranbir also apologises to Pallavi for his past misbehaviour while Rhea is astonished to see Ranbir and Pallavi having an emotional moment.

Pallavi tells everyone to help her in planning a veneration and party for Prachi’s child.

Rhea and Aliya are puzzled by Pallavi’s acting while Pallavi is making her evil plans regarding Prachi.

The next morning, Ranbir comes to Prachi’s room with a glass of juice and admires her sleeping beauty.

Prachi acts rudely with Ranbir while Shahana scolds Prachi for being rude to Ranbir.

Prachi tells Shahana about Pallavi’s party and Aryan coming to attend it.

Meanwhile, Ranbir listens to Prachi’s conversation and resolves to win Prachi’s love and trust back just like in old times.

At the party, Rhea is happy to see Shaiyana while Aliya tells her that she has invited Shayana to the party.

Shayna congratulates Ranbir and Rhea for the veneration but Ranbir tells her that the Veneration is for Prachi and her child and goes to Prachi who just entered the party hall.

Shayna looks confused and asks Rhea about it who looks angry and takes Shayna away.

Meanwhile, Ranbir and Prachi take Pallavi’s blessing while Pallavi asks Ranbir to escort Prachi and make her sit for veneration.

Later, Prachi is searching for holy water when Dida comes in and hugs Pallavi for being nice to Prachi and praises her for being so understanding and caring for Prachi.

Talking meaningfully, Pallavi tells Dida that Prachi will only get what she deserves today and forever.

Dida does not like Pallavi’s tone and becomes suspicious of her intentions.

Meanwhile, Shayana asks Rhea about the confusion and talks about her fake pregnancy.

Rhea gets angry at Shayna and tells her to never talk about the fakeness of her pregnancy.

After a while, Rhea expresses her frustration to Aliya and Shayana saying she does not like Prachi getting all the attention.

However, Aliya tells her to act normal and not create a scene in front of guests.