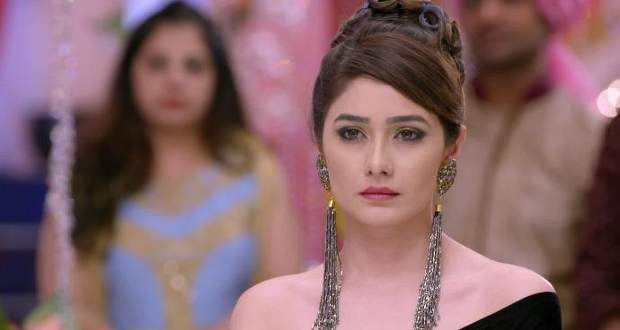 Meanwhile, Ranbir calls Prachi with a hope that she will stop him from getting engaged to Rhea.

But, on contrary Prachi tells him that she is happy without him. Ranbir angrily cuts the call.

Pallavi comes into the room and asks Ranbir whether he is happy with the engagement or not. Ranbir replies that he is happy in his family's happiness.

Ranbir becomes restless after talking to Prachi but tries to behave normal and happy during the function.

Later, Tanu provokes Rhea by saying that long back Pragya took away Abhi from her.

She says she is happy to see Rhea getting engaged to Ranbir and tells her to always love him.

Tanu says to herself that she will make Rhea a medium to get Abhi back in her life against Pragya.

Pragya teaches Abhi to drink water by his self as she won't be always there with him.

Ranbir clicks a selfie with Rhea and sends it to Prachi.

Prachi gets heartbroken seeing the photo while Sahana tells Prachi to go and stop Ranbir's engagement.

Prachi explains her why she can't do that but Sahana leaves somewhere while Prachi talks to her.