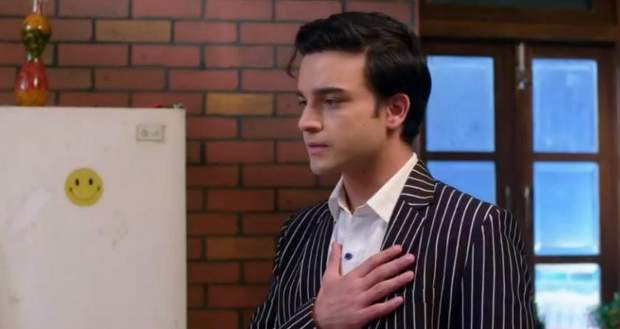 Today's Kumkum Bhagya 25th March 2022 episode starts with Prachi waiting for Ranbeer to come into her room through the night and getting restless.

Prachi throws a pillow on the couch along with a blanket thinking of Ranbeer feeling uncomfortable in any means.

However, Ranbeer does not go to Prachi’s room and continues to try to sleep in the study.

The night passes with Prachi and Ranbeer not getting sleep and waiting for each other to get comfortable.

As morning arrives, Prachi wakes up and discovers no sign of Ranbeer in her room which angers her.

Meanwhile, Ranbeer comes into Prachi's room after she leaves and slips into the washroom for a shower.

Prachi finds no one in the study room and gets furious thinking Ranbeer might be in Rhea’s room.

As Prachi walks to Rhea’s room, Sahana joins her asking what the matter is.

Both try out some tricks and peep into Rhea’s room, making Rhea confused as to what is going on.

After making sure Ranbeer is not there, Sahana was about to tell Prachi about the medicine when Rhea interrupts them.

Rhea tries to rub salt on Prachi’s illusionary fear of losing Ranbeer to her but gets shunned by Prachi’s savage answer.

Prachi tells Rhea that if she begins to be jealous of Ranbeer and Rhea, that can be very dangerous to Rhea's well-being as Prachi will snatch away what belongs to her from Rhea.

After getting into the room, Prachi and Sahana talk about the jealousy matter when Ranbeer appears and gets happy on hearing Prachi being upset due to his absence.

Prachi tries to hide her sleeping arrangement for him but Ranbeer teases her after noticing it.

Later, Sahana discloses the discovery of the medicine to Prachi which makes Prachi feel guilty for blaming Ranbeer.

At the breakfast table, Rhea comes and begins to serve Ranbeer.

However, the plate gets taken by Sahana jokingly which offends Rhea gravely.

Rhea tries to start an argument but stops after Ranbeer asks her to calm down about it.

Prachi steps in and gives Ranbeer his plate, prepared with food which makes Rhea boil with anger.

As the subject of Sahana returning to her house sparks, Rhea reveals about Sahana’s pregnancy in front of everybody.

Ranbeer requests Rhea to take back her words owing to which Rhea tells everyone that she was joking about Sahana’s pregnancy.

Rhea eats from Ranbeer’s plate which sparks anger in Prachi and she leaves from there followed by Sahana.

On reaching the room, Prachi and Sahana share a hug as Prachi apologizes to Sahana regarding the pregnancy.

Ranbeer appears in the room and assures Sahana that he and Prachi will always be there to support her.

Hearing this, Sahana feels guilty about lying to Ranbeer and leaves the room.

Prachi sparks the talk about Rhea eating food from his plate to divert Ranbeer as he suspects Sahana’s behavior.

Ranbeer gets happy on seeing Prachi act jealous and asks her to trust him from now on.

Meanwhile, Rhea tells Aaliyah that she will get friendly with Ranbeer slowly to grow closer to him.