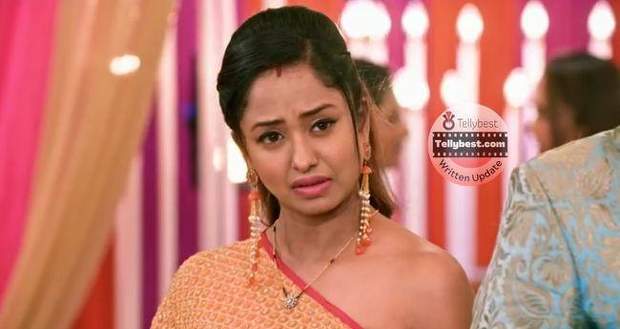 Today's Kumkum Bhagya 25th November 2022 episode starts with Sid trying to start a car and coming down to check on it when Prachi’s dupatta gets stuck to Sid’s watch.

Just then Ranveer watches Prachi and Sid at that moment while Rhea adds fuel to Ranbir's perception telling him that Prachi and Sid have grown so close that they have no space for him.

Ranveer decides to follow Prachi and enquires about the meeting that Sid has told Pallavi about.

In the meanwhile, Sahana joins Sid and Prachi from the back entrance.

After a while, Rhea calls Ranbeer asking him to come back as he will get humiliated on catching them red-handed.

In her excitement, she calls Aliya to tell her the good news.

However, Aliya tells her that she is in a fix and will talk to her later.

Rhea ignores her and continues to tell her about the point against Prachi.

In the meantime, Aliya tells Rhea that she is being blackmailed by the person who has taken Mihika.

Later, Aliya arrives at the hotel and starts to beat the goons with a tray but stops at seeing the gun.

The goons tell her that she will have to give 10 lac rupees to them which was lost last time.

Aliya threatens to call the police but they blackmailed her into exposing her.

Later, Aliya slaps them hard and tells them she will come back with their money.

The goons are insecure about Aliya when Mihika tries to draw attention to them.

The goons cover them with a bedsheet when Aliya returns to get her phone back.

Meanwhile, Aliya threatens Rathi about someday she will take revenge on him for double-crossing her.

After a while, Prachi, Sid and Shahana arrive at the hotel but hide seeing Aliya coming down.

Afterwards, Ranveer comes to the hotel and sweet-talks the receptionist to find Sid and Prachi’s number.

However, he is disappointed to hear that they are not booked in their hotel.

After a while, Ranbeer thinks to check nearby hotels to find them.

Later, Shahana is conversing with Sid that why Sid never told them about having a sister.

As the trio is walking in search of goons and Mihika, Prachi overhears the goon's voice coming from the door.

The goons are tired of waiting and decide to have a cup of tea.

However, Prachi anticipates his coming out of the room and asks everyone to hide.

Later, Prachi tells Shahana that they will have to bring Mihika out of their room and she has an idea to do it.

© Copyright tellybest.com, 2022, 2023. All Rights Reserved. Unauthorized use and/or duplication of any material from tellybest.com without written permission is strictly prohibited.
Cached Saved on: Thursday 24th of November 2022 11:36:24 PMCached Disp on: Sunday 4th of December 2022 11:51:53 PM