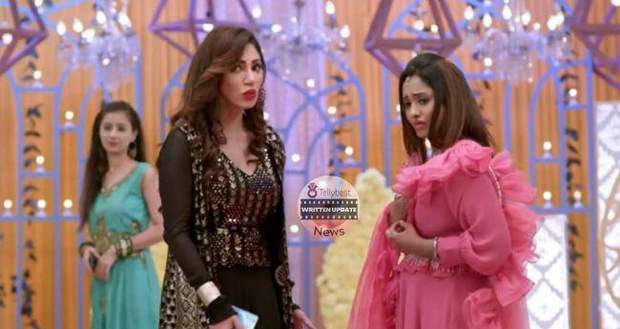 Today's Kumkum Bhagya 25th October 2022 episode starts with Pallavi stopping Prachi and telling her to stop humiliating them and destroying the relationships between the family members.

Pallavi commands Prachi to talk to Ranbir and make the guests believe that the Kohli family is an ideal family with no internal conflicts.

After Pallavi leaves, Rhea comes to Prachi and tells her that this is not her house and she should stop causing trouble for them.

Prachi does not stay silent and asks Rhea to leave as she will not listen to her taunts silently.

Rhea asks Prachi if she will beat her the same way Ranbir beat up Sid when suddenly Ranbir appears and asks Rhea to stop talking to Prachi like that.

Prachi leaves with Ranbir following her while Rhea urges Alia to hurry up with their plan to finish off Prachi.

Ranbir sees Prachi crying and asks her why while Prachi remembers Pallavi’s harsh words and jerks Ranbir away.

However, Ranbir somehow manages to comfort Prachi and assures her that he will do whatever she wants him to do.

Prachi tells Ranbir about how Pallavi is angry with her and asks him to resolve the matter with Sid in front of the guests.

Ranbir agrees to do it and says that he will do so because of Prachi.

Later, at the party, Sahana and Aryan begin to argue again about Sahana caring so much about Sid.

Dida asks Aryan why he is feeling so jealous seeing Sahana with Sid which silences him.

Rhea provides Pallavi with some emotional support by assuring her that she was right about what she told Ranbir.

Rhea adds further that it was not Vikram who fought with Pallavi, but a manipulated mind by Prachi.

Ranbir comes and announces that he is sorry for fighting with Sid in front of the guests.

Walking to Sid, Ranbir says sorry to him for hurting him and says that he has a surprise for everyone.

As the lights turn off, Ranbir and Prachi appear on the dance floor together and dance to a romantic song.

Meanwhile, Rhea and Alia plan that they would light up crackers at Prachi which will hurt her.

Sahana thinks about the incident with Alia’s car and realizes that it was a plan to kill Siddharth.

After Sahana explains everything to Prachi and Sid, they get shocked to realize the truth but get interrupted by Ranbir.

Just then, Rhea comes and takes Prachi with her, saying she has something to talk to her.

© Copyright tellybest.com, 2022, 2023. All Rights Reserved. Unauthorized use and/or duplication of any material from tellybest.com without written permission is strictly prohibited.
Cached Saved on: Monday 21st of November 2022 04:44:46 AMCached Disp on: Monday 5th of December 2022 12:38:01 AM