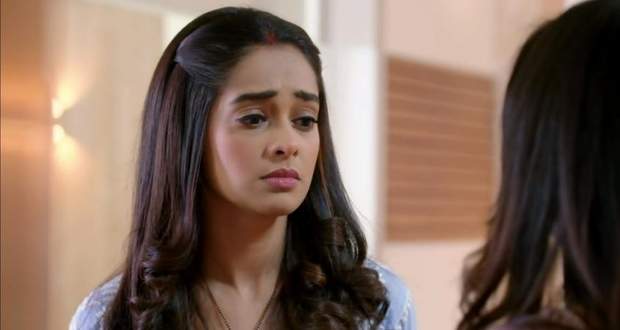 Today's Kumkum Bhagya 26th April 2022 episode starts with Prachi talking with her doctor and assuring her that she will take care of herself from now on so that her baby does not get hurt.

The nurse delivers the news of Ranbir waking up to Prachi which sparks immediate excitement and happiness on her face.

Meanwhile, Ranbir gets discharged by the doctor and gets happy as he can go home and meet Prachi.

Prachi rushes into Ranbir’s room but gets disappointed on seeing no one there, the nurse informs her that he has been discharged and taken home.

Later, at the house, Rhea and Aaliyah were discussing Ranbir’s condition when Prachi bursts in and asks them where Ranbir is.

However, Aaliyah and Rhea intentionally ignore her and do not give an answer to Prachi’s question.

Prachi comes back after searching the whole house and gets to know that Ranbir is sleeping in Rhea’s room currently.

Pallavi requests Prachi not to cause any tension between her and Ranbir to which Prachi gladly agrees.

Coming into Rhea’s room, Prachi spots Ranbir sleeping and caresses his face with affection reflecting through her every touch.

Prachi puts Ranbir’s hands on her stomach and tells him that she is going to be a mother soon.

Insisting Ranbir to open his eyes, Prachi remembers his words of loving her unconditionally until he continues to breathe.

Prachi tells Ranbir that she wants his complete love and not some incomplete love story like Romeo and Juliet.

Laying her head on Ranbir’s still chest, Prachi sheds tears of regret and confesses that she loves Ranbir too from the depth of her heart.

Prachi thanks Ranbir for saving Prachi and their baby’s life and fulfilling his father’s responsibility.

Just then, Prachi hears the approaching steps of someone and Rhea appears at the doorway while glaring at Prachi.