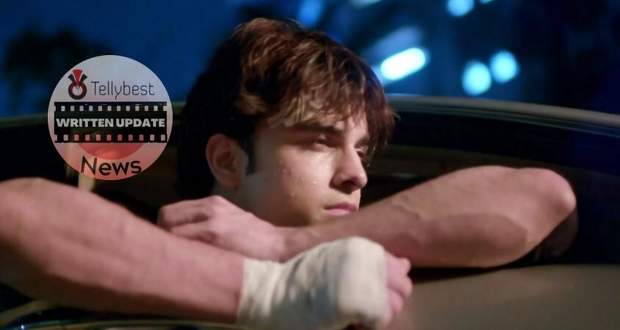 Today's Kumkum Bhagya 26th August 2022 episode starts with Prachi discovering that she has been kidnapped and the goons are planning to sell her and the other girls outside Delhi.

After one of the girls asks Prachi how she ended up there, Prachi tells them about her husband betraying her.

Meanwhile, Sahana sprinkles water on Ranbir’s face to wake him up so that they can search for Prachi together.

Ranbir stumbles in his steps as he is dead drunk and does not respond clearly to Sahana’s words.

As Sahana tells him that Prachi has been kidnapped as she was leaving him, Ranbir sets off to find Prachi while dwindling.

Sahana catches him and asks him to sit in the car so that they search for the tempo whose number she still remembers.

Ranbir quietly obeys Sahana and sits beside her as she drives the car trying to look for the tempo.

Meanwhile, Rhea and Alia celebrate their happiness by drinking wine together.

Rhea says that they should let Siddharth go as he does not have any use for them but Alia disagrees with her.

Thinking about the scope of Siddharth telling the truth in guilt, Alia decides to keep his sister in their custody for a bit longer.

Sahana asks Ranbir how much he loves Prachi and asks him to detect the direction in which the tempo may have gone.

Ranbir gets out of the car after saying that he feels something and approaches a drunk homeless beggar sitting at the side of the street.

Asking the beggar where Prachi is, Ranbir joins him in gossiping while Sahana’s patience starts to run out.

Sahana takes Ranbir away from the beggar and asks him to concentrate on finding Prachi as she is in danger.

Obeying Sahana, Ranbir follows her commands and gets into the car as Sahana drives off to check other locations.

On the other hand, Prachi and the other girls get transferred into a warehouse after blindfolding and tying their hands together.

Prachi pretends to have a coughing fit to distract the guard and cuts her rope with a piece of glass and continues to help the others.

As they begin to escape, the goons notice them and run after them to catch them alive.

While running away through a window, a girl comes in from outside and places a gun on Prachi’s head stopping her from escaping.

© Copyright tellybest.com, 2020, 2021. All Rights Reserved. Unauthorized use and/or duplication of any material from tellybest.com without written permission is strictly prohibited.
Cached Saved on: Sunday 2nd of October 2022 12:12:39 AM