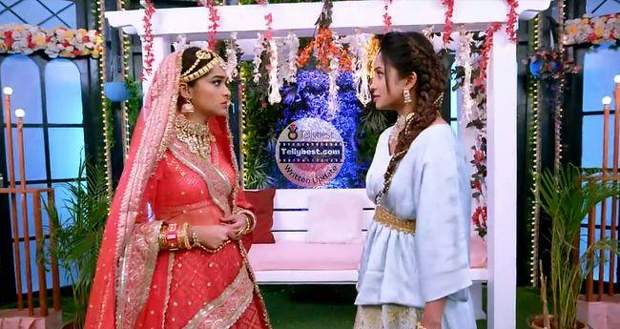 Today's Kumkum Bhagya 26th December 2022 episode starts with Ranbir asking Prachi to reveal the truth due to which Rhea is getting the opportunity to blame her relentlessly.

Prachi asks Ranbir about which truth he is talking about to which Ranbir replies that Rhea is destroying her, and their child’s life.

Everyone gets shocked upon hearing Ranbir’s words while Ranbir announces that Prachi is carrying his child.

Ranbir explains to everyone that Rhea is trying to marry off Prachi to Sid as she does not want Ranbir to reunite with Prachi and his child.

Rhea asks Ranbir why he is lying to everyone and says that Prachi’s acts are disgusting which is why she has to leave the house.

As Rhea says that Prachi’s baby is a sin, both Ranbir and Prachi ask Rhea to shut up at the same moment.

Prachi tells everyone that the child belongs to her and her husband, Ranbir.

Rhea gets horrified as Ranbir reveals how she and Alia are blackmailing Sid by kidnapping his sister, Mihika.

Pallavi asks Sid if Ranbir’s words are true and announce that Rhea does not deserve to live with them after placing a hard slap on her face.

Ranbir asks Aryan to call the police but Rhea throws away his phone and says that she will not leave the house.

Ranbir calls the police himself and tells Rhea that she has to go to jail now.

Rhea boils in anger on seeing her secret getting exposed and drags Prachi along with her and pushes her off the balcony.

With Prachi’s fall from the second floor, Ranbir’s dream ends and he finds himself back to reality.

Rhea gets irritated seeing the marriage paused and fakes getting dizzy so that everyone hurries with the proceedings.

Pallavi asks Sid and Prachi to return to the mandap so that they can finish the wedding as soon as possible.

Ranbir tells Sid that he is going to rescue Mihika so that they can reveal Alia and Rhea without any fear.

Sid wishes Ranbir the best of luck and assures him that he will not let Prachi know about him being aware of the truth.

As Ranbir sits in his car after tracking Alia’s location, Aryan asks him to get out and asks him what he is hiding from him.

Pallavi asks Prachi to think about her child only, which opens her eyes and shows her what she should do further.

Sahana comes to prepare Prachi but Prachi announces that she will not go to the mandap.

On the other hand, Aryan gets infuriated after discovering the truth from Ranbir and says that he will go with him.

However, Ranbir asks Aryan to stay there and take care of Prachi as his mother is involved in this matter.

Prachi tells Sahana that she is anxious about the marriage and has decided not to go to the mandap.

Dida asks Pallavi to rethink her decision regarding Prachi-Sid’s marriage once which infuriates Rhea.

Rhea calls Alia and says that they need to declare a war where they will see the end of everything.

© Copyright tellybest.com, 2022, 2023. All Rights Reserved. Unauthorized use and/or duplication of any material from tellybest.com without written permission is strictly prohibited.
Cached Saved on: Wednesday 25th of January 2023 08:50:40 AMCached Disp on: Wednesday 1st of February 2023 05:56:10 PM