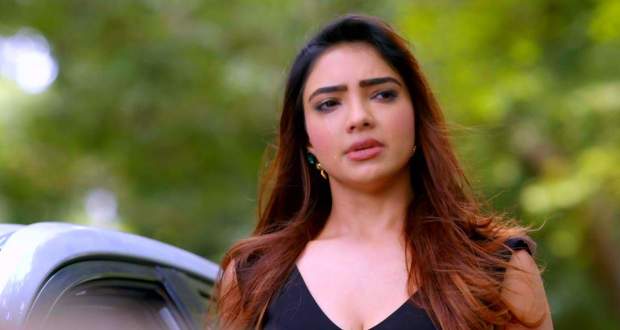 Today's Kumkum Bhagya 26 January 2021 episode starts with Abhi telling Pragya that someone wants to kill her while Pragya thinks that it is the guy whom she crashed into earlier.

Pragua stops and tries to talk to the hitman while a car come in between them.

Abhi drags her away and gets into his car but isn't able to find the key.

Pragya sees the hitman coming towards them and goes to Abhi to inform him.

The hitman tries to shoot them but the bullet doesn't come out while Abhi goes towards him realises that the gun is out of bullets.

The hitman brings out another gun while Pragya throws a rock towards him and Abhi knocks him out.

They run away and tell Purab on the call to send police while the hitman gets a call from Digvijay and inform him about the situation.

Digvijay says that he's sent other hitmen and the first to kill Abhi will get the money.

Elsewhere, Abhi and Pragya steal a horse from a Barat and leave while the hitman goes after them.

Meanwhile, Aaryan gets a call from Rhea and realises that she is also in the temple due to which he gets tensed.

Abhi and Pragya see the hitman coming after them and go towards the village road.

Ranbir takes Prachi and Sahana into the temple while Aaryan distracts Rhea who comes towards him.

Many hitmen come to Digvijay's storage hall where he makes his entry and tells them that it is going to be a competition between all of them for 2 crores and the money will decrease after every hour.

Time limit is 12 hours and if anyone kills Abhi within 10 minutes then he will give that hitman 12 crores.

The hitmen leave after getting Abhi's information.

© Copyright tellybest.com, 2020, 2021. All Rights Reserved. Unauthorized use and/or duplication of any material from tellybest.com without written permission is strictly prohibited.
Cached Saved on: Tuesday 9th of March 2021 03:46:27 AM