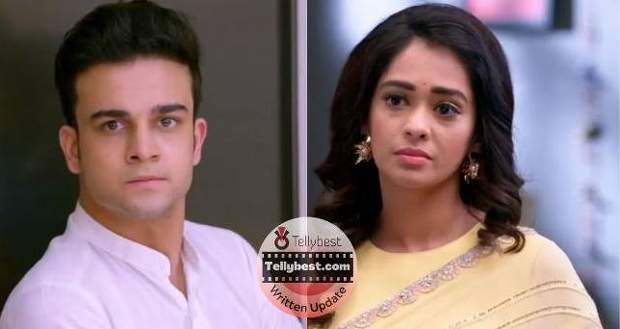 Today's Kumkum Bhagya 26th January 2023 episode starts with Prachi kissing that necklace and missing Panchi as she recalls the moment she and Ranbir saw Panchi for the first time.

Meanwhile, Khushi brings food for her Mai and asks her to eat but she refuses to do so as she has already eaten from the dhaba.

Khushi adjusts the blanket over Mai and kisses her head bidding her good night while she sleeps comfortably on the bed.

Opening the window, Khushi stares at the night sky full of stars along with Prachi and Ranbir who are also gazing at the sky at the same time.

All three of them wish for a falling star so that they can wish for something they want from the heavens.

A falling star appears while Ranbir and Prachi wish to get reunited with Panchi by some miracle taking place.

Khushi wishes to meet her father as she wants to know what type of person he is and gets happy as she could make her wish.

A flashback shows Ranbir and Prachi in their hospital clothes adoring Panchi and Ranbir saying that his family is complete now.

Ranbir and Prachi stare at the mirror with Panchi in their arms and feel blessed to have such a perfect family.

Prachi comes back to her senses as Sahana calls her saying that Ashok has come to meet her.

Ashok acts a bit dramatic but apologizes to Prachi for firing her like that all of a sudden but Prachi stops him from saying such things.

Ashok says he has come to her as her father, not her boss, as he wants her to be with him at work.

Prachi asks Ashok why she is the one who needs to go to the Delhi office to which Ashok replies that their Delhi branch is facing problems.

Ashok says that his son will be returning from America and he wants Prachi to groom him for doing business in India.

With Ashok and others requesting her, Prachi agrees to go to Delhi but feels restless inside her heart.

Meanwhile, Aryan asks Ranbir to sleep after watching him sitting in the dark and says he thought that Ranbir was thinking about Prachi.

Ranbir says that he is doing well without Prachi even though he said that he cannot live without her.

The next day, Prachi leaves her home for Delhi after gathering the courage to enter her past once again.

Sahana says that she will come there after 1 week so Prachi does not need to be stressed.

Ranbir gets the responsibility of picking up an important client’s daughter named Kaya from the airport.

The client tells Ranbir that Kaya is very shy and timid so he trusted Ranbir with that work whereas, in reality, Kaya is hot-tempered and cocky.

Prachi arrives in Delhi and stands behind Ranbir with both missing each other by a short span of seconds.

Prachi comes closer to Ranbir but Ranbir turns around in the other direction as he feels his heart beating faster.

© Copyright tellybest.com, 2022, 2023. All Rights Reserved. Unauthorized use and/or duplication of any material from tellybest.com without written permission is strictly prohibited.
Cached Saved on: Friday 27th of January 2023 12:00:28 AMCached Disp on: Wednesday 1st of February 2023 10:14:31 PM