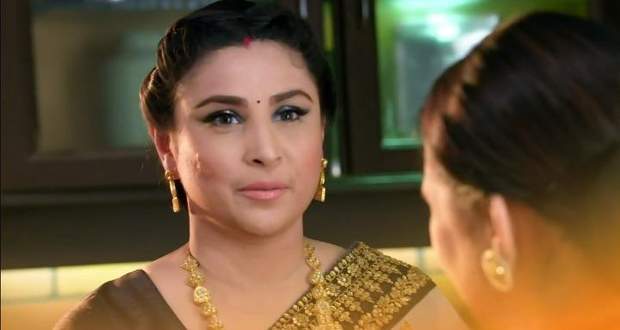 Today's Kumkum Bhagya 26th July 2022 episode starts with Pallavi looking after Ranbir and Prachi while they do puja together and telling Vikram how good they look together.

Dida and Vikram agree with Pallavi’s words and tell her that the long wait to see them happy together was worth it.

As this subject comes up, Pallavi expresses her regret over trying to separate Ranbir and Prachi for such a long time.

Panditji asks Ranbir and Prachi to forward their right hands together but Prachi sits still as she is still pissed about Ranbir and Rhea.

Pallavi comes forward and puts Prachi’s right hand on Ranbir’s with a smile.

On seeing a happy atmosphere, Pallavi feels good while Rhea and Alia burn by themselves at a corner.

Meanwhile, Sahana notices water dropping in a bucket from the air conditioner and decides to change the bucket.

As Sahana goes outside to throw the water, Aryan comes in front of her resulting in all the water falling on him.

Sahana apologizes instantly to Aryan because of throwing water at him and says that she did not spot him standing there.

Seeing that it is Aryan, Sahana exclaims with happiness and asks him what he is doing there.

Just then, a girl enters whom Aryan introduces as his girlfriend, Millie.

Elsewhere, Dida’s friend comes to visit everyone and becomes happy when she gets greeted by Ranbir and Prachi.

Shayna and Alia come after Rhea to see where she is but fail to find her in the room.

In the meantime, Sahana stops Aryan from entering the house to which Aryan replies with a joke that Sahana is flirting with him.

Sahana gets mad and walks off after telling Aryan that he is very bad.

Dida’s friend blesses Ranbir and Prachi and wishes them to have a happy life ahead of them with their children.

Later, Vikram goes to call Pallavi for the puja after getting mocked by Dida and her friend.

At the same time, Rhea tells Alia that she doubts Pallavi’s intentions which Pallavi overhears.

Pallavi tells Rhea to stop acting like a child and become mature for once.