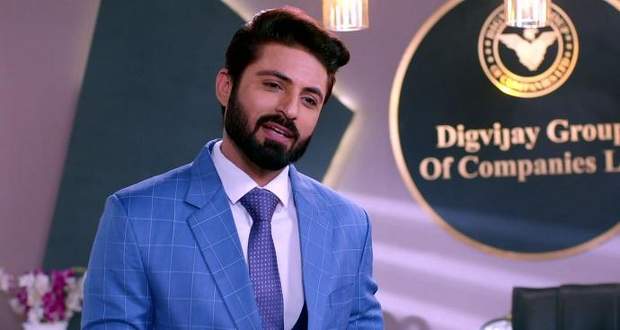 Digvijay enters the house in a waiter's outfit to kill Abhi.

Aaryan tells Ranbir that whatever he is doing to hurt Prachi isn't right. Ranbir gets furious thinking about Prachi.

Aaryan tries to explain to Ranbir that he should be with the one who loves him immensely and not the one who doesn't know the meaning of love.

Ranbir confronts Aaryan telling him whatever he is doing is right and now he is going to get engaged with Rhea as Prachi is happy with Parth.

Meanwhile, Sahana comes to the ceremony and talks to Ranbir. Ranbir tells her if Prachi is feeling bad she should have come there to stop him.

Later, Ranbir leaves the conversation. Sahana and Aaryan team up to stop the engagement.

Aliya overhears Sahana and Aaryan's conversation. She locks Aaryan in the bathroom so that he doesn't create any mess during the engagement ceremony.

Abhi sees Aliya locking Aaryan in the bathroom and gets curious.

Aliya warns Pragya not to bring Abhi downstairs as he might hurt someone.

Sahana waits for Aaryan but he doesn't come so she starts finding him.

Digvijay sees Abhi and removes his gun out aiming at Abhi to shoot him.