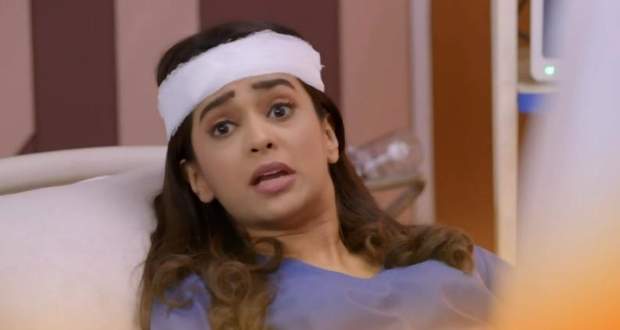 Today's Kumkum Bhagya 26th May 2022 episode starts with Ranbir coming into Prachi’s room and their eyes meeting each other’s.

Ranbir sits beside Prachi and slowly takes her hands in his hold while both he and Prachi get emotional.

Taking the mangal sutra in his hand, Ranbir puts it around Prachi’s neck where its rightful place is.

Just then, Ranbir’s doctor comes in and asks Ranbir to go home as he has been discharged.

However, Ranbir refuses to go but gives up after Prachi requests him to return home.

After Ranbir comes out of Prachi’s room with the doctor, Ranbir requests him to tell his family that he needs to be admitted for a few more days.

At first, the doctor refuses to do so but after Ranbir’s numerous requests, agrees to let him stay.

Pallavi, Vikram, Rhea, and Alia leave after knowing about Ranbir’s stay and go to Prachi’s room to visit her.

Prachi thanks everyone for coming to see her and especially mentions Rhea as she saved her life earlier.

However, Pallavi and Alia taunt Prachi by throwing insults at her while Vikram tries to stop them.

After Pallavi, Alia, and Vikram exit from the room, Rhea goes to Prachi and makes it clear that she does not have any kind of loving feelings for her.

Rhea tells Prachi that she made a mistake while being emotional remembering Pragya’s words.

Further, Rhea reveals that she was the one who sent Nick to kill Prachi and was coming to hit her earlier.

Prachi remains shocked while Rhea reminds Prachi that Ranbir belongs to her and she will snatch him away at any cost.

Meanwhile, Ranbir somehow convinces the nurse at the reception to shift him beside Prachi’s room.

Rhea bumps into Sahana and informs her about Prachi’s accident on her way to leave the hospital.

Later, Pallavi comes back to ask Ranbir something and spots him walking around the corridors.

After confronting the doctor, Pallavi comes to know that Ranbir lied to them so he can stay with Prachi and has shifted to the room beside her.