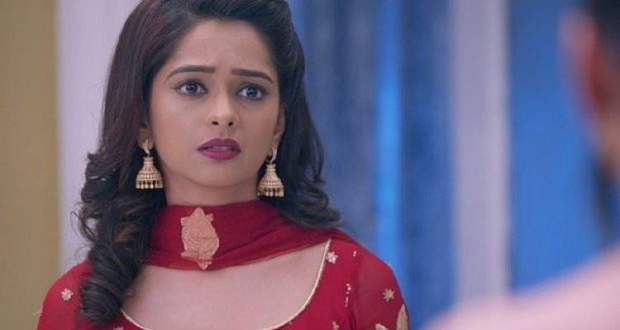 Today's Kumkum Bhagya 26 November 2020 episode starts with the inspector telling Pragya to bring Prachi to the police station to herself apply for bail of Rhea.

Meanwhile, Abhi goes to the lawyer's house and tells him to do the paperwork for Rhea's bail.

Pragya meets Rhea even though the constable doesn't allow her and tells Rhea that she will free her from the jail after which the constable stages her away.

Aliya thinks that her plan will flop if Pragya bails Rhea out.

Ranbir comes home and feeds Pallavi sweets while greeting Happy Diwali. Pallavi notices the ring on his hand and questions him about it.

Ranbir says that it's an engagement ring and reveals that he got engaged to Prachi after which Pallavi slaps him.

Elsewhere, Pragya comes home and tells Prachi to come with her to the police station to tell the police to release Rhea.

Prachi does not agree to come with her and insults Rhea saying that she's arrogant, selfish, and lives just for herself.

She further says that a girl like that cannot be related to her after which Pragya reveals to her that Rhea is her sister which leaves Prachi and Saritha shocked.

Aliya asks Rhea to forget Pragya if she needs Ranbir and instigates Rhea against Prachi and Pragya.

Meanwhile, Ranbir is telling Pallavi to give him one reason to hate Prachi while Pallavi says that she knows what's good for him.

She further locks him in his room and says that he has to forget her if he wants Prachi.

Pragya reveals to Prachi that Rhea is her twin while Saritha says that Mr. Mehra is her husband.

Afterwards, Pragya and Prachi leave for the police station.

Ranbir tells Pallavi to understand him due to which she gets angry and leaves him locked in the room while Vikram and Beeji confront her.

Elsewhere, Prachi thinks she is lucky that Mr. Mehra is her dad.

© Copyright tellybest.com, 2020, 2021. All Rights Reserved. Unauthorized use and/or duplication of any material from tellybest.com without written permission is strictly prohibited.
Cached Saved on: Thursday 28th of January 2021 07:36:30 PM